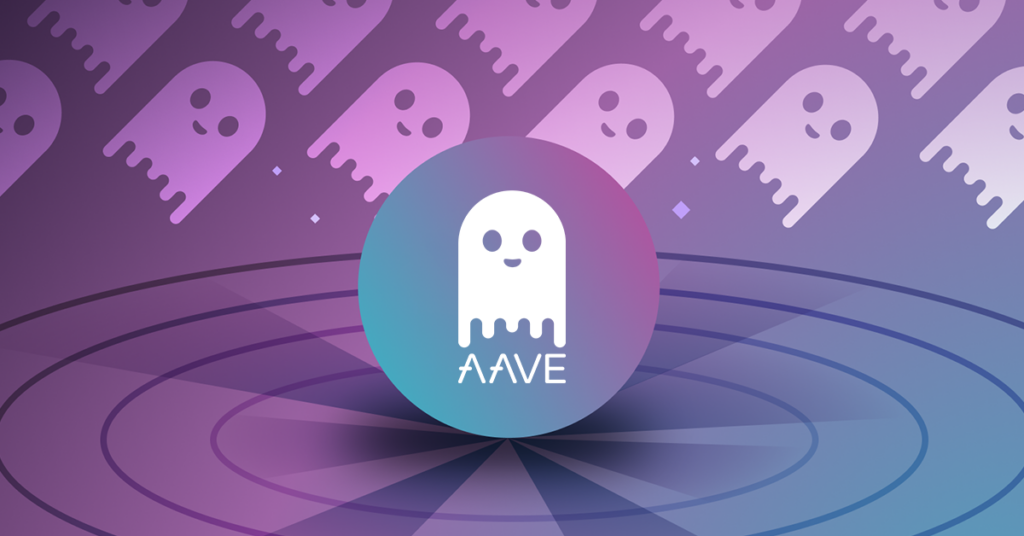 AAVE is a decentralized and open-source protocol built on Ethereum that allows users to deposit assets to earn interest or borrow assets. AAVE’s first version launched in 2017 under the name ETHLend, being the first DeFi lending protocol.

ETHLend was a sort of a peer-to-peer marketplace that created links between lenders and borrowers. It could be seen as a job posting board using loans instead of jobs that enabled users to negotiate terms without a third party.

The protocol lost traction in the 2018 bear market due to a lack of liquidity and the difficulty of connecting all parties involved.

A completely new version with novel features was launched in January 2020, though, changing the DeFi space forever.

Conceptually, the current version of Aave is similar to ETHLend, in that both allow users to deposit assets to earn interest and borrow certain currencies. At the functionality level, however, they are completely different.

The platform requires no Anti Money Laundering (AML) or Know Your Customer (KYC) documentation, and there is no middleman involved. Lending and borrowing cryptocurrencies are done in a decentralized and trustless manner.

Basically, a lender deposits their funds into a “pool” from which users can borrow. Very simply put, the algorithm behind Aave and the liquidity pools are practically the protocol.

A small percentage of the assets in a pool is set aside as a hedge against volatility within the protocol. This makes it possible for lenders to withdraw their funds at any moment.

Users can switch between these two types of rates at any time, but they have to pay a small ETH gas fee to do so.

If things are quite simple as far as deposits are concerned, they get a little more complex when it comes to loans. Since there is no income verification, like in traditional finance, in DeFi, the system is based on collateral and liquidation.

To be precise, in order to borrow, you must deposit an amount of ERC20-based assets as collateral. This amount must be larger than the amount being borrowed.

Let us take an easy-to-understand example. If the price of an Ether is $3,000 and you deposit it within the platform, you can borrow 75% of that value in the DAI stablecoin, so 2250 DAI with which you can then do what you want. That’s how it works.

What happens if the Ether value decreases while it’s stored as collateral? Here is where liquidation comes in. If the value falls below a certain automatically set price, the protocol will liquidate you partially or entirely.

In other words, it will sell the Ether you deposited at market price, which is basically the same as the system used in margin trading. Once the fund is posted for liquidation, other users can purchase it at a discount. 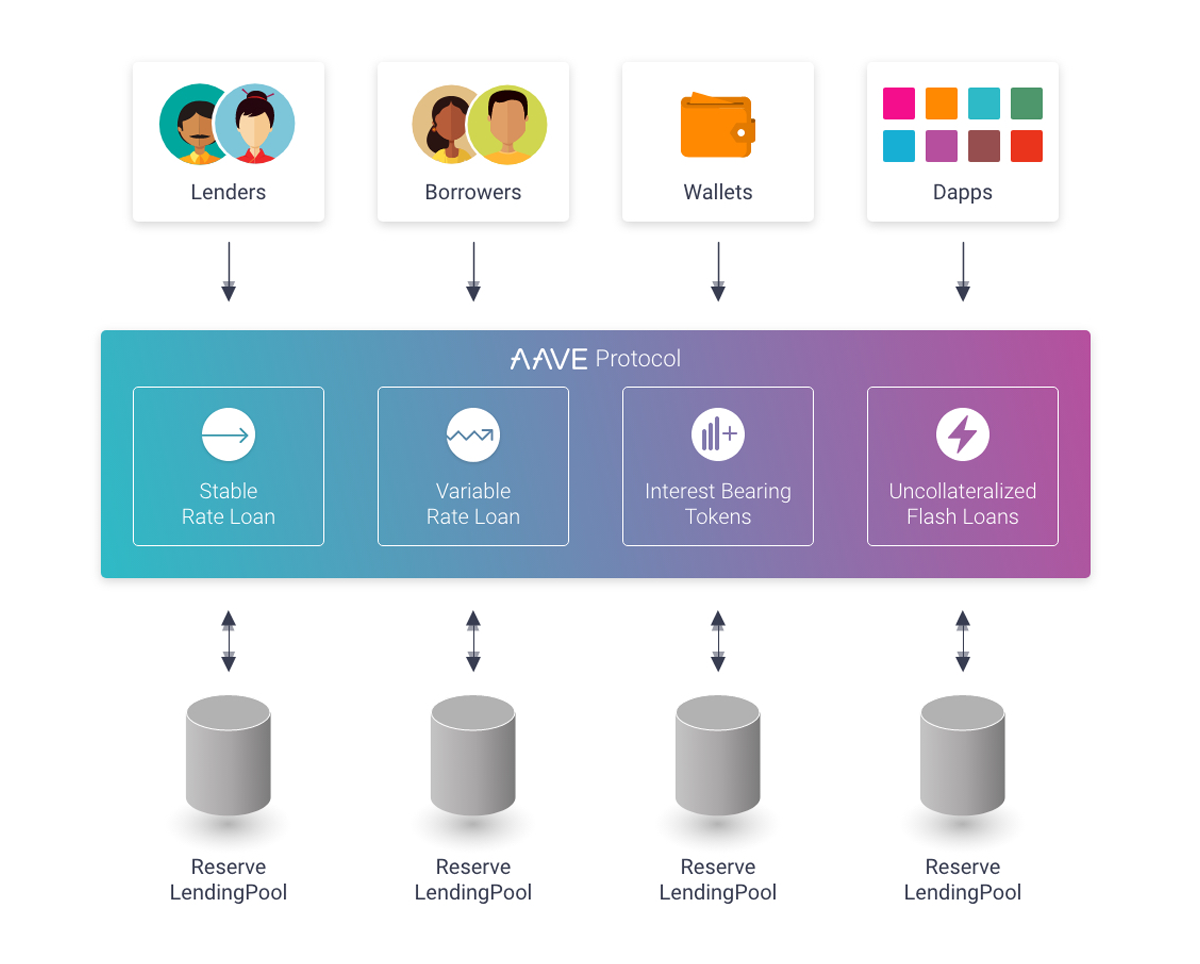 In addition to these options, Aave also introduced flash loans. They are considered to be the next generation of finance as well as the protocol’s greatest contribution to the DeFi sector so far.

Since flash loans require more technical knowledge to be executed, they have been designed more for developers. The idea behind the concept is pretty interesting.

To be specific, you can borrow any available amount of assets without the need for collateral. However, there is a catch. The liquidity and interest must be paid back to the protocol until the next Ethereum block has been mined.

If the loan is not paid back, the transaction is canceled. It is not saved and registered on the network, so it’s as if it didn’t take place. 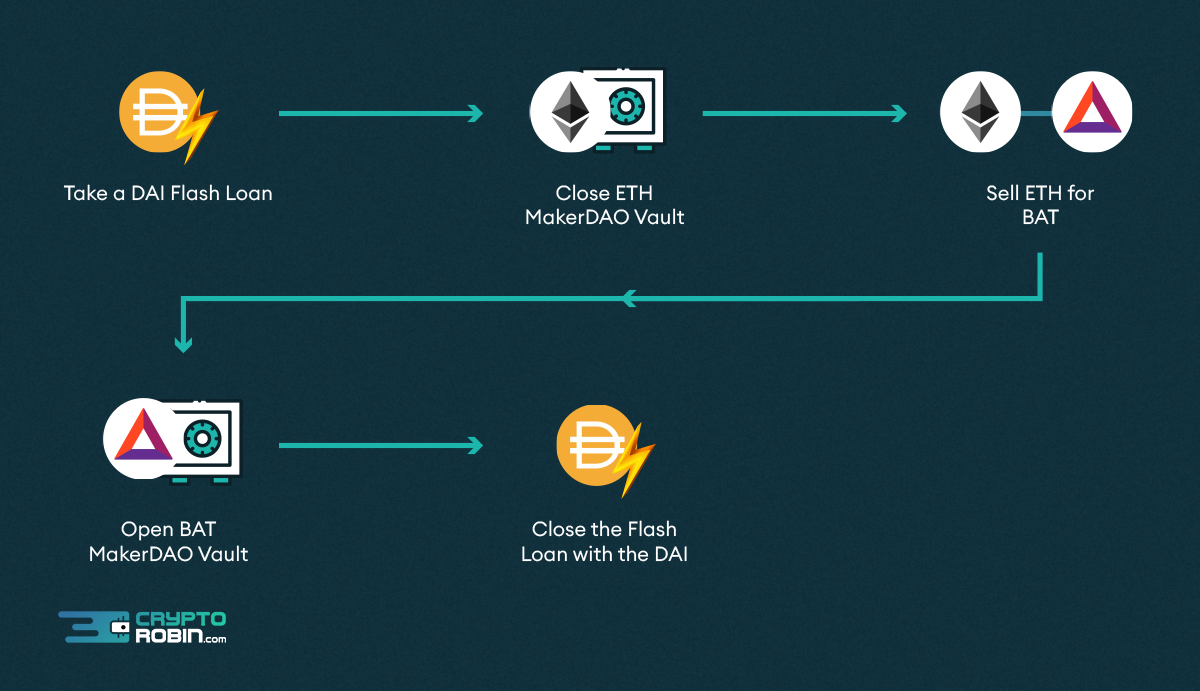 LEND was the utility token originally used within the ETHLend platform. With the transition from ETHLent to Aave, it has changed to AAVE. The migration process started in October 2020, and LEND coins have been converted to AAVE at a 100:1 ratio, i.e. 1 AAVE for every 100 LEND.

AAVE has a maximum supply of 16 million, with a circulating supply of almost 13 million AAVE tokens. With the 2.0 version also released at the end of last year, namely in December, the platform introduced the staking option.

Its aim is to have a safety mechanism against a possible collapse of the crypto market. In such a scenario, 30% of the staked coins will be attributed to the protocol to cover the deficit caused by this market crash.

In December 2020, AAVE took on additional use cases, such as platform governance. The community can now use AAVE to propose or vote on initiatives to improve the protocol.

In addition to the fact that almost all AAVE tokens are in circulation and in the hands of the community, the most interesting part of the economic model is that AAVE does not mint coins for liquidity providers as most DeFi projects do. The yield comes from the protocol and not from inflation mechanisms.

It is important to note that, so far, all the development of this project has been very transparent, and the team has followed and fulfilled all the goals proposed in the AAVE roadmap.

One such goal was the integration with Uniswap. This allows users to benefit from flash loans on the Uniswap market, which seems to be quite profitable if you know what you’re doing.

To sum up, Aave is one of the most solid projects in the DeFi space, with nearly $13 billion in TVL (Total Value Locked). It is also one of the few projects that are actively trying to attract institutional investors to this area.

That’s how they managed to become one of the safest platforms, and that’s what security audits, conducted by companies like CertiK, SigmaPrime, and PeckShield, best show. This project will likely go up once Ethereum “unleashes” along with ETH 2.0 or layer-2 solutions.