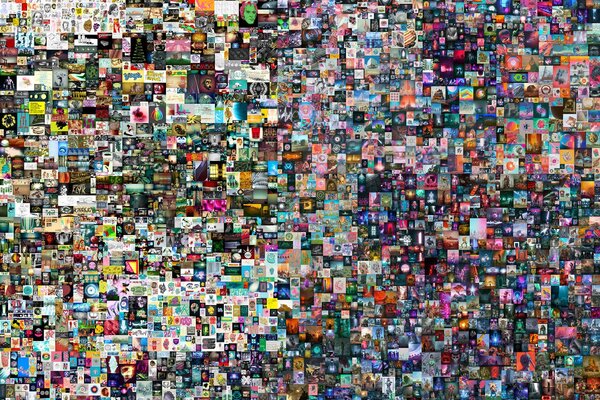 Crypto artist Beeple’s NFT has just broken a sale record, selling for a noteworthy $69.3 million at Christie’s. The auction was conducted by the 255-year-old auction house on the MakersPlace NFT platform.

The unprecedented NFT sale fetched more money than many physical works by more famous artists and has thus placed Beeple among “the top three most valuable living artists,” according to Christie’s.

The digital artwork is titled “EVERYDAYS: THE FIRST 5000 DAYS” and is a digital collage of all the images created by Mike Winkelmann aka Beeple. The piece is connected to a non-fungible token (NFT), which is a special type of cryptographic token that works on the blockchain.

The final price is not the only one making the headlines, though. The way this bidding evolved is also noteworthy as just before the final minutes of the auction, the price was within the $20 million range. In just a few minutes, the price jumped to the $50 million range, only to reach $69,346,250 at the last minute.

“Artists have been using hardware and software to create artwork and distribute it on the internet for the last 20+ years but there was never a real way to truly own and collect it. With NFT’s that has now changed. I believe we are witnessing the beginning of the next chapter in art history, digital art.” – Beeple

It is still unknown whether the buyer used cryptocurrencies or fiat to purchase Beeple’s artwork. The buyer’s name hasn’t been revealed yet, but the rumors doing the rounds point to Justin Sun, founder of the cryptocurrency platform Tron, since he’s the one who bid $60.25 million for the piece and is not new to bidding for NFTs.

Beeple entered the NFTs market last year, selling his first series of non-fungible tokes for $66,666 each. He broke another record in February when one of his animated artworks sold for $6.6 million in ETH on NFT marketplace Nifty Gateway.