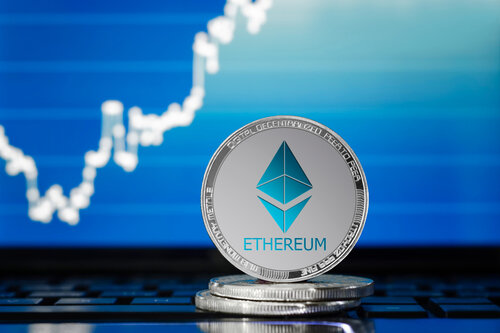 The Friday morning of the Asian trading session has been a rewarding one for those who own Ethereum. The second-largest digital asset in the world has reclaimed the $2,000 barrier and is just $50 off, meaning it made a new ATH at press time.

ETH is close to forming its fifth daily green candle following an increase of 4% since yesterday. Weekly gains are totaling 26%, outperforming Bitcoin, which has grown, over the same period of time, by only 16%.

Are Institutions Behind the Rally?

Ethereum is now just $50 away from its ATH of $2,050, which was recorded on February 20th. Analysts believe that the increase may come as a result of institutions loading up.

The CEO of Crypto Quant, Ki Young Ju, noticed that 400,000 ETH flowed out from Coinbase just a couple of days ago, which made him speculate that “institutions are now buying.”

Just like in the case of BTC, large exchange outflows are considered bullish since the asset is heading to cold wallets or institutional funds instead of being left ready to be sold quickly.

The newest update from Grayscale shows that the assets under management figure is now totaling $46 billion. Out of this number, $6.1 billion can be found in the Ethereum trust, which is equal to about 3 million ETH or 2.6% of the total supply.

Of course, an unwanted side effect of Ethereum growing is that gas fees are also increasing.

Naturally, these are only average prices, which means that carrying a complex smart contract operation on Uniswap can also reach $78.