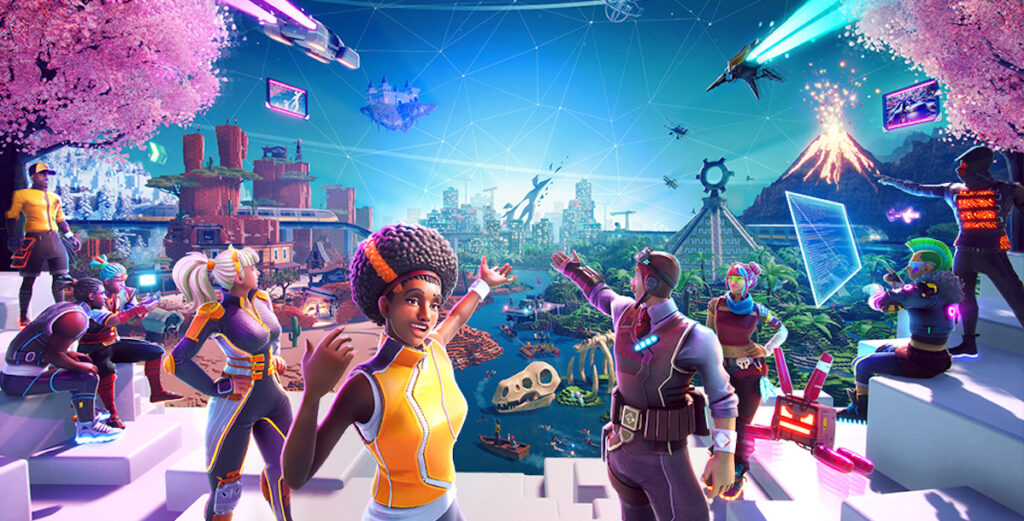 The Metaverse – everybody’s talking about it!

More than an online game in which you can brag to your friends about your epic skins and avatars, it represents a virtual world, a new method of online establishment.

Combining web 3 with AV/VR technology, gaming and blockchain, metaverses will be the future of online communities.

They will create new ownership opportunities and possible collaborations, social interaction, and creating new jobs that you couldn’t even dream about before.

Even if we’re just getting started, behind the scenes there is already a lot of work and plenty of new ideas.

Let’s see now which are the most popular metaverses and what the digital future holds for us in stores.

Bloktopia is a VR project developed on the Polygon network that has as its basis a virtual building 21-storey high (a symbol representing the 21 million Bitcoins) where users enjoy the possibility of doing … anything.

Bloktopians will be able to get returns as owners of virtual properties if they partake in various games and social activities but also by creating new communities or from advertising.

The community will be actively involved in designing the storeys and organizing events.

Bloktopia aims to be a crypto education hub and one ready for developing new projects. At the same time, web 2 companies will have the chance to join and open new virtual offices here.

KuCoin, one of the most popular crypto exchanges, has already announced it will open an office here.

Think about how would it be to have a job in such a company, literally in the metaverse? Could you represent the company in guest relations or present and sell certain products?

I won’t get you any more excited, but just keep in mind that opportunities will keep on popping up.

What if we would combine the blockchain and Minecraft? The result would be The Sandbox!

It’s a virtual world built on Ethereum and inspired by video games. The project is focused on creating worlds and the possibilities are infinite with the only limit being your imagination.

Any user can build, own and monetize their own game experience using the SAND token.

As of now, over 70 million worlds, games, and apps have been created – all of them being completely owned by users. Every user can have their own LAND which is represented by an NFT on Ethereum.

If you’re not already convinced, just know that Snoop Dogg has his own LAND and somebody paid not less than $450,000 to be his neighbor in The Sandbox. How cool is it to be able to say you’re Snoop’s neighbor, regardless if it’s the metaverse or the real world?

We’ve talked about the biggest NFT project in the crypto space, Bored Ape Yacht Club, before. You can check out our video on it to refresh your memory.

Otherside represents the upcoming Yuga Labs-developed metaverse, the same team behind Bored Ape. The team considers it a metaRPG which is a combination between a multiplayer online role playing game and a metaverse.

Here NFTs can become characters and thousands of people will be able to play at the same time. You can even buy your own land using the project’s coin, ApeCoin.

Currently, we don’t know very much about this game, but it is sure to have an immense impact so keep following updates about it as things are about to get interesting.

How could I best describe the experience offered by Axie Infinity? I’d say … adorable and full of money! This blockchain game managed to conquer the world with its super cute characters. It was among the first crypto projects that managed to offer users the chance to make money solely through gaming.

In fact, many people, especially from less developed areas, have managed to make money and support their families by playing Axie Infinity.

Built on Ethereum and inspired by the Pokemon franchise, the game requires you to collect monsters and use them in fights against other players – sounds familiar?

Every Axie is represented by an NFT that you have to buy in order to play.

There are also AXS (Axie Infinity Shards) and SLP (Smooth Love Potion) tokens that are governance tokens and, respectively, rewards for winning battles. SLP tokens can also be used to create new Axies.

Would you be willing to invest in a virtual piece of land? If you’re still thinking about it, remember that someone bought a piece of land in Decentraland with $2.4 million.

Maybe it’s hard to believe but it’s true – this metaverse is immensely popular among users.

It is developed on the Ethereum network and based on a 3D game in which you can have your own avatar, buy pretty much anything, and own all via NFTs. You can also take part in events and built your own business.

With over 300,000 active monthly users, the project is completely owned by the community. Every user has the possibility to create their own apps, avatars, settings, and personalized infrastructures.

If you have imagination and the needed will, here is where you can start a revolution. Decentraland is supported by the MANA token, used as an exchange coin inside the metaverse.

Thanks to its growing popularity, many big names have also shown their interest in it with Samsung, Atari, and Prager Metis already buying land here and using it for commercial purposes.

cryptopediametaverse
Previous articleWarner Bros. And Nifty’s Are Teaming Up to Launch a Looney Tunes Story That Will Be Bolstered by NFTsNext articleTron Doesn’t Want a Terra-Like Catastrophe