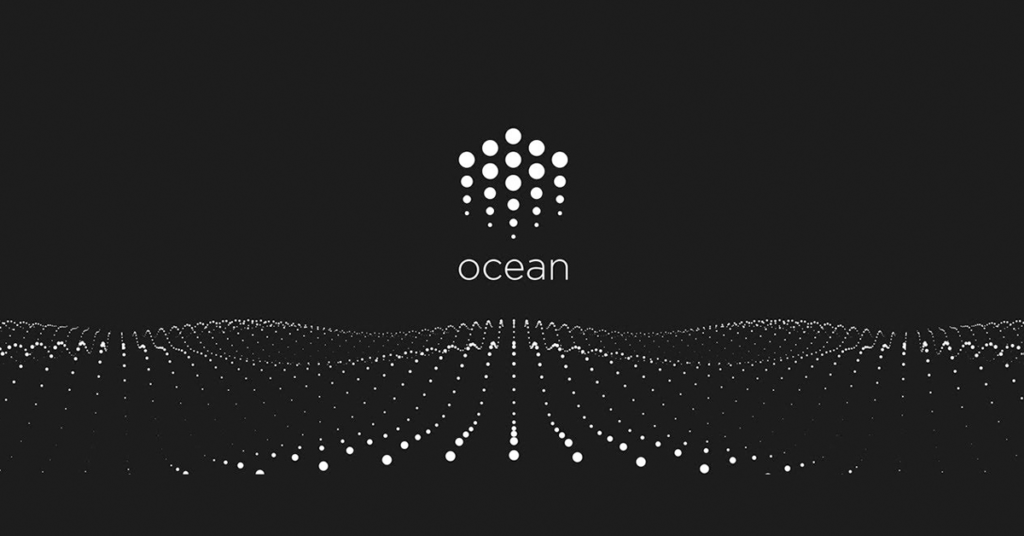 Before we talk in detail about Ocean Protocol, let’s remember that data has become a part of the core center of many business operations over the last few years, being created at every level of business. It has reached the status of a strategic asset that has a concrete value for any company and business targeting success.

The commercialization of data has thus become ubiquitous, but only a few tech conglomerates control it and even lock it away only to share it when doing so meets their business goals.

As the importance of data and data collection increases, so does the potential for the firms using it to monetize it. Not only do big data barons get to keep the data and use it to their benefit but, at times, they fail to do a good job protecting our privacy.

Here is where Ocean Protocol comes in. The blockchain-based organization aims to decentralize and democratize data sharing in a private and secure way and allow businesses and individuals alike to unlock the value of their data, exchange it, and thus monetize data and data services through the use of ERC-20 based datatokens.

The Ocean Protocol is a decentralized data exchange protocol built on top of the Ethereum blockchain. It utilizes this type of technology, smart contracts, and cryptocurrency tokens to connect data consumers with data providers. This further allows data sharing to be done in a way that ensures transparency, traceability, and guaranteed trust for all those that are involved in the process.

Simply put, Ocean Protocol aims to enable data owners to regain control over their data and benefit from its value without being tied down to any single marketplace. It also seeks to strengthen the data owners’ ability to control what their data is used for by using a decentralized blockchain to replace centralized servers.

What makes Ocean Protocol score some notable points is that publishers get to monetize their data without losing privacy and control. Plus, consumers are now able to access datasets that were previously either difficult to find or unavailable.

The Ocean Foundation and the Ocean Protocol team have embraced the following values:

How It Works & What Makes It Different

For this system to work, the Ocean Protocol operates through the following components:

What the Ocean Protocol does is allow users to create a decentralized marketplace, which is composed of data assets and services that users can exchange.

This marketplace connects individuals and businesses in need of data (data consumers) to those who own data (data providers). Anybody with available datasets can thus tokenize them and make them available on the Ocean Market.

Since we’ve mentioned data control and privacy, the data that is exchanged in a marketplace will not be stored on the Ocean Protocol’s network itself.

Consumers will search for the data set they’re interested in on different marketplaces, and once they’ve found it, they will purchase an encrypted reference to it. This reference can be unlocked only when certain conditions are met. Therefore, data owners will retain complete control of their data, no matter who buys it and what operations are performed on it.

What makes it possible to share data while preserving user privacy is the Ocean Protocol’s Compute-to-Data feature. This feature comes to resolve the tradeoff between the benefits one can get from using private data and the risks of exposing it. It allows the data to stay on-premise while allowing third parties to run various computing jobs on it. End users will thus get only the status of their computing job, as well as the final results back, and not the asset itself.

It’s this feature, as well the advantages it leads to, that turns Ocean Protocol into a project worthy of attention. Data providers can thus contribute to the development of research or AI by leveraging certain portions of a data set while preserving certain user information private. They can select Compute-to-Data as the only allowed access mechanism on their data set, set a price for this, and, consequently, monetize the latent potential of data.

The Ocean Protocol uses ERC20-based datatokens to control access to data sets, and each data service will thus be represented by a unique datatoken, which is then used to wrap a dataset or compute-to-data service. This way, third parties will be able to perform various operations on the data but without data leaving the publisher’s secure enclave.

Since the protocol tokenizes the access controls, crypto wallets thus become repositories of data, that is, data wallets. A crypto wallet will therefore hold the token that grants the right to access a specific data set. If you want to transfer those rights, all you have to do is transfer the tokens granting those rights to another wallet or address.

In order to be able to access a data set, you’re required to hold 1.0 datatokens and transfer them to the data provider that runs Ocean Provider.

This further turns crypto exchanges into data marketplaces. The protocol uses smart contracts to make sure that each data token can be exchanged across the Ethereum blockchain and within its dapps. These smart contracts ensure that all data providers and AI practitioners can verify the proper execution of their algorithms.

The Ocean Token is the means of exchange used within the Ocean Protocol network. We can think of it as the commodity that is used to run the data economy as well as to incentivize the community to provide the resources required to scale and secure the network. The token has three utilities as follows:

Since OCEAN is an ERC20-based token operating on the Ethereum blockchain, it benefits from Ethereum’s proof-of-work mining and node network. This ensures protection against a variety of attacks.

The actors that use and earn OCEAN tokens across the network are divided into four groups: 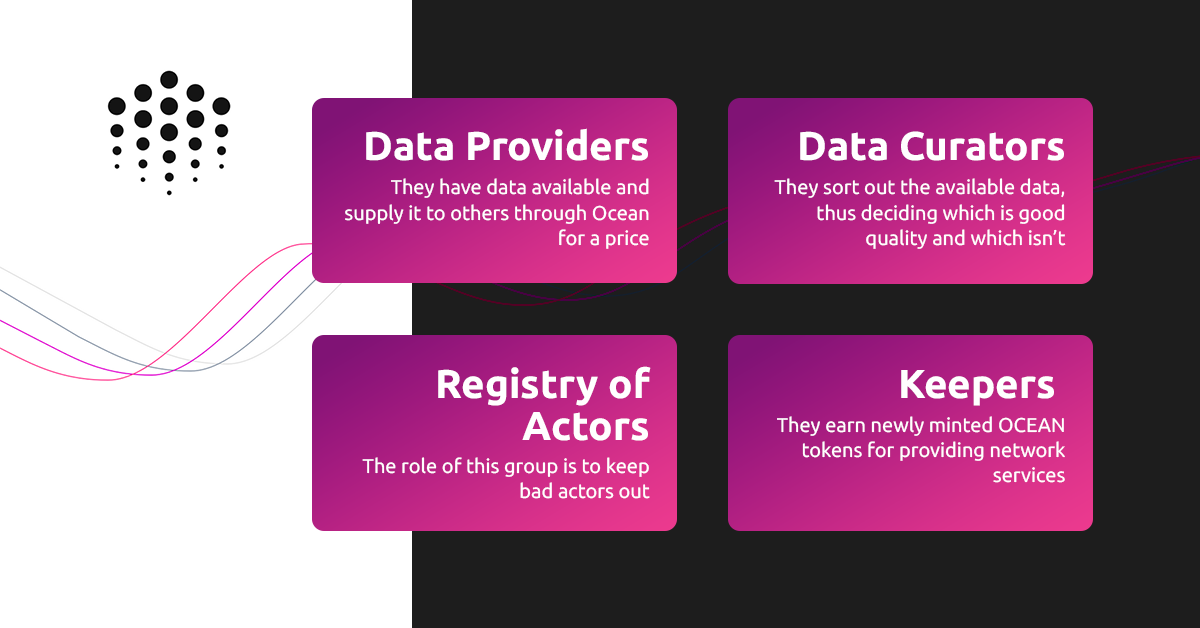 The maximum supply of OCEAN tokens is 1.41 billion, and the circulating supply is now at 347.20 million tokens. 51% of the maximum supply will be disbursed over decades to fund the OceanDAO-curated community projects.

The core team behind Ocean Protocol consists of roughly 40 professionals with expertise in different fields, such as AI and blockchain technology, business, and marketing.

The Ocean Protocol founder and CEO is Bruce Pon, also known for having founded BigchainDB and Avantalion Intl Consulting before Ocean Protocol. The second founder is Trent McConaghy, an AI professional with a noteworthy background that includes successful projects such as ADA and Solido that use AI to help circuit designers. 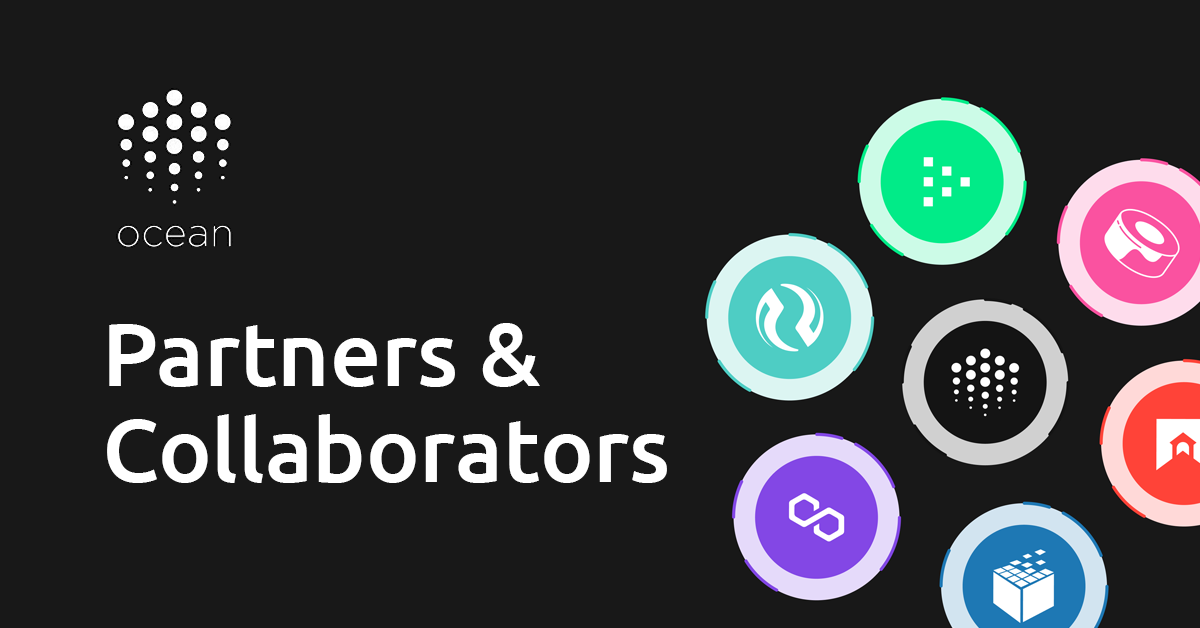 The community of such a project plays a central role in the way the project evolves, and Ocean Protocol already has strong support from an active and enthusiastic community on Telegram and Twitter.

The companies that are either actively working on integrating their projects with Ocean Protocol or already have an agreement with Ocean Protocol include but are not limited to the following: dexFreight, Roche, Travala, DAC, Balancer, AllianceBlock, Messari, Molecule, Moonbeam, Polygon, and Web3 Foundation.

Although data is everywhere, only a few players actually get to use and monetize it. Ocean Protocol comes to change that and aims to decentralize data and provide a framework of trust while enabling data control, privacy, security, transparency, and compliance.

To achieve all this, it uses pieces of Ascribe to treat data intellectual property that can be licensed and sold, privacy mechanisms from BigChainDB in order to provide users with full control over their data, the models of governance and managing a network from IPDB (Interplanetary Database), and the marketplace framework from DEX.

Ocean Protocol aims at creating a new type of data economy that includes every kind of data provider and consumer, as well as an environment that relies on individual discretion and innovation in order to deliver fairer outcomes.

Making it possible for individuals to take back the data they own, monetize it while preserving privacy, and thus contribute to the development of research and projects that can better our world is an endeavor worthy of attention and support.