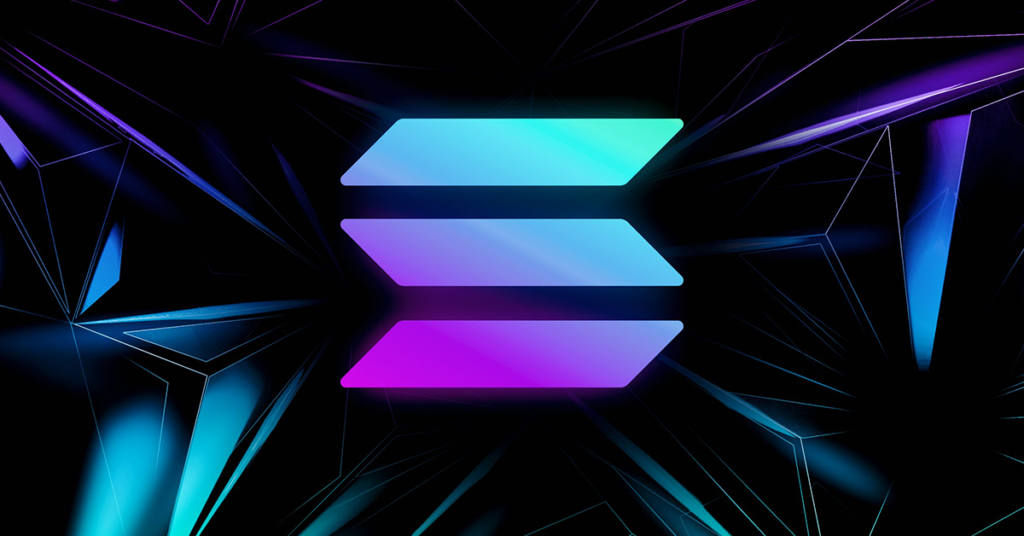 Solana is a high-performance layer-1 blockchain that uses a Proof-of-Stake (PoS) consensus mechanism with timestamped transactions in order to improve efficiency and a very low entry barrier.

It is similar to Ethereum, Polkadot, Elrond, and other such projects, in that developers can create tokens or DeFi applications within the ecosystem, so it is compatible with smart contracts. The project aims to solve the ‘trilemma’ of scalability, security, and decentralization in order for businesses to scale using blockchain technology.

Solana’s revolutionary whitepaper was written by the project’s founder and CEO, Anatoly Yakovenko, in 2017, who realized that the SHA256 hash function could be used to create a decentralized clock on a cryptocurrency blockchain.

The team behind Solana consists of former Apple, Google, Qualcomm, and Dropbox employees. Besides being based on database technologies similar to those used by Microsoft and Google, the project’s architecture has also been contoured and influenced by Filecoin, a decentralized file storage blockchain.

Given the team’s experience and knowledge, as well as the technologies used for the project’s development, Solana is currently the fastest and, theoretically, most scalable blockchain out there.

The blockchain processes 50,000 transactions per second (TPS), and a new block is generated every 400 milliseconds. Solana does not use sharding or layer-2 solutions to achieve these performances.

As we’ve mentioned above, Solana’s aim is to find solutions to the well-known ‘trilemma,’ and in order to achieve this, it has devised eight innovative protocols. The way each of these novel factors contributes to solving it is what makes Solana the fastest, as well as the most secure and scalable decentralized blockchain within the industry at this moment. 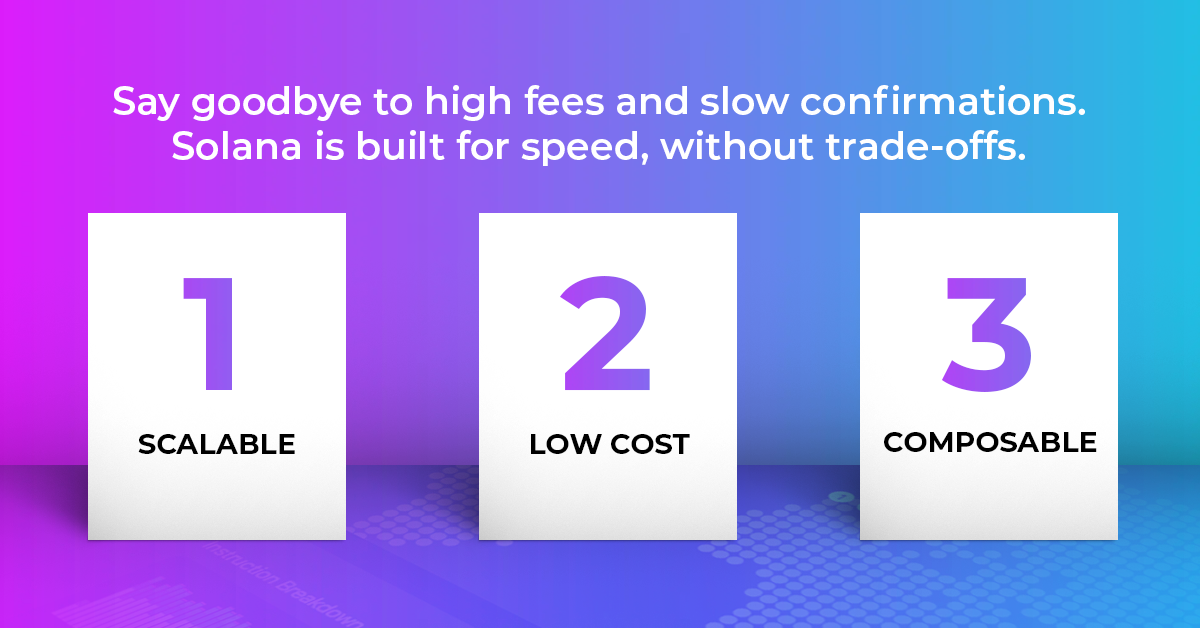 To be able to process this high number of transactions without neglecting the decentralized aspects (DeFi) and security, Solana uses Proof of History (PoH), a component of its PoS consensus mechanism and what has come to be considered the project’s breakthrough innovation.

Proof of History is a method by which all transactions can be time-stamped, i.e., the validator nodes can create the next block on the network without the need for coordination with the entire network. This is possible because the validator nodes can “trust” in the order of messages they have received from other nodes through these timestamps.

Here is where the above-mentioned SHA256 hash function comes into sight. One of the innovative aspects of Solana is its decentralized clock which Anatoly Yakovenko achieved by adjusting the SHA256 mining algorithm.

Solana uses this hash function’s repetitive outputs as a reference – timestamps, which creates something like a clock tick, with each of these ticks being 400ms. Considering that a regular clock’s tick is 1 second, one can easily notice the advantages and speed provided by this blockchain.

A difficulty encountered with networks of this type (distributed) has always been that nodes cannot agree on the time and succession in which network events occur. Using PoH, Solana saves a lot of time in transaction processing and thus achieves amazing performance.

Validator nodes check transactions, store data, and generate new network blocks once every 400ms. Another factor that allows the blockchain to be scalable is that, in order to run a validator node within Solana, there is no minimum SOL staking requirement.

Each validator node gets to be the leader (one at a time) and produce blocks. Leaders rotate every 4 blocks, that is every 1.6 seconds. Still, your likelihood of becoming a Leader depends on the amount of SOL you stake; therefore, the more SOL tokens a validator stakes, the higher their chances of becoming a leader.

Since the Solana protocol is permissionless and open-source and there is no staking barrier, theoretically, anyone can become a validator. However, this may vary depending on geography and local regulatory restrictions. Also, in order for validators to be able to receive rewards, users are required to complete registration as well as KYC details.

Those 1.6 seconds we talked about make it very difficult for bad actors to attack the network. What’s more, the stakes of misbehaving nodes are slashed, and the slashed funds are added to block generation rewards, which incentivizes good behavior.

All this explains why there are no minimum stacking requirements because it takes a large number of validating nodes to support the network and give it the ability to scale at any time.

SOL is a token native to the Solana blockchain, with a maximum SOL supply of 448 million and a circulating supply of 272,637,123 (therefore, more than 50%). The SOL token is used to pay transaction fees on the Solana network and is burned in the process, which is obviously preferable for investors.

This token is also used for staking by people operating validating nodes and as a reward for validators.

The project does not provide clear and structured information on the distribution of tokens. There is a page where monthly currency activity reports are posted, but the last report was in December 2020.

The maximum supply is 448 million and not 500 million, as part of the community last year discovered a wallet with about 13 million SOL that needed to be used for a loan from the foundation to an anonymous market maker to provide liquidity on Binance. This was not initially mentioned by the team, which does not look very good in terms of transparency.

However, such things can be overlooked if we relate to the DeFi ecosystem and the infrastructure they have built. 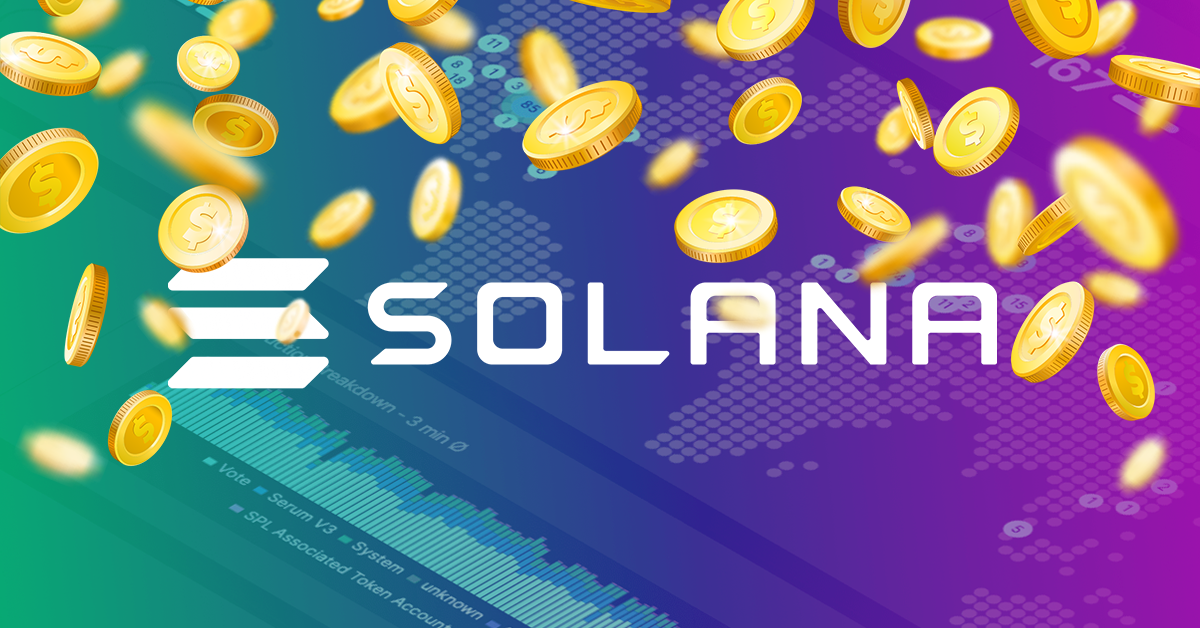 DeFi Infrastructure and dApps for Solana

Before choosing Solana, he tested other platforms to find the best blockchain infrastructure that would work within the desired parameters.

A DEX based on order book trading needs a blockchain that can process many transactions per second. It could never work on Ethereum for example, or rather, on the current version of Ethereum.

Choosing Solana says a lot about the technical capabilities of the ecosystem, and more than that, this will attract other quality (decentralized) dApps in the future.

In addition to Serum, Solana already has 34 applications in the DeFi area and 126 in total, so it is a project that has already reached a certain maturity, which is also seen in the price of the SOL token.

Given that the Solana Foundation has even greater ambitions and would like to increase the number of transactions per second to 500,000/s, this is an open invitation for developers interested in a high-performance environment for their dApps.

The DeFi area is the most important and represents the final destination at the moment for projects like Solana. This ecosystem has enormous potential, and it is highly likely for it to increase in the future, which will consequently influence the medium and long-term price.

Solana comes to solve many of the traditional issues encountered in the earlier blockchain technology. Its innovative protocols, new structure for verifying transactions, and the more efficient consensus mechanism algorithm turn it into what is currently considered by many the world’s highest-performing blockchain.