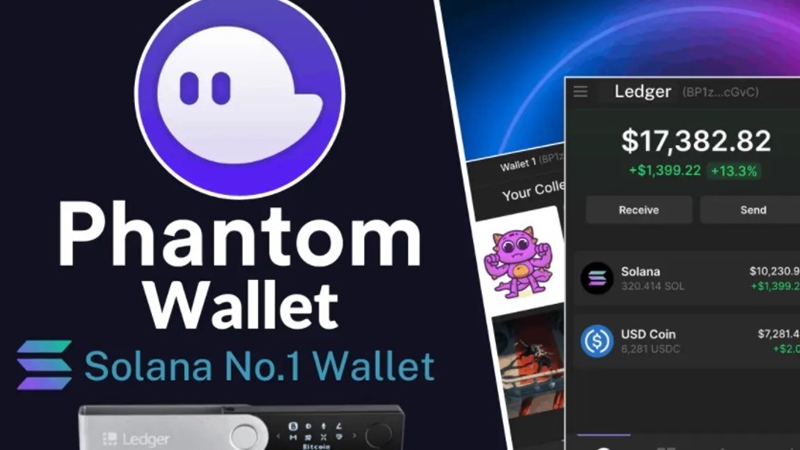 Phantom is the well-known cryptocurrency wallet and browser extension for the Solana ecosystem. It has similar attributes as Metamask, the wallet built on Ethereum, providing users the chance to interact with decentralized finance and other applications on the network.

Through this wallet, crypto owners can send, receive, and swap tokens or NFTs within the Solana ecosystem. It can also offer the possibility to integrate with the network’s decentralized exchanges, lending protocols, and liquidity pools.

Solana became the second most popular blockchain for NFT trading. Phantom is the go-to wallet for the Solana blockchain and NFT trading. An interesting feature is that users are allowed to preview their NFT in the wallet, something not offered on MetaMask.

In only three months, the NFT craze has seen over $500 million in volume for secondary sales on the Solana blockchain. The speed of the ecosystem growth is quite impressive, as Solana has recently managed to overtake Cardano by market capitalization, sitting in the 4th position after Bitcoin, Ethereum, and BNB.

Phantom has managed to reach over 1.2 million active users, and Chris Kalani, chief product officer and co-founder of the wallet, stated that the mobile version of the app would be released in January. Of course, a “private beta version will be around the holidays,” he also said.
Moreover, there is also a beta Ethereum wallet in the works, so Phantom is looking for integration with other blockchains.

Another great news coming with the mobile version release of the wallet is that users will be able to stake their SOL through the app.

“This means they can mint NFTs, stake tokens, and more while not being tied to their computers, which carries considerable weight considering how fast the Solana ecosystem currently moves,” concluded Phantom CEO and co-founder Brandon Millman.