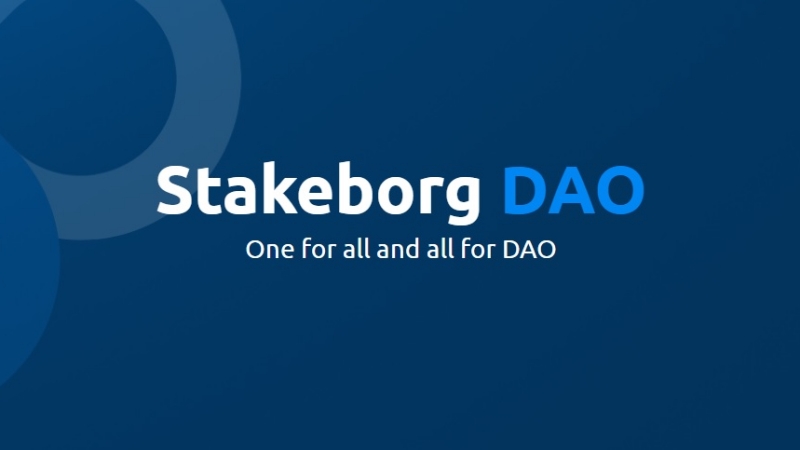 What Is StakeborgDAO? We’ll begin with an example to understand it better.

Let’s imagine the following scenario – you find yourself on Earth following an atomic apocalypse. Fortunately, your group of friends is there with you.

It would be hard to get by at first, investing time and resources in the things that truly matter for how your life would be from then on.

None of you got training in becoming a supreme leader who takes charge and takes the responsibility in case of a disaster but you all each have different resources and pieces of knowledge which would benefit the others and thus the entire community.

This is why you decide on creating an organization in which everybody contributes with their resources, everybody decides the fate of the community through a democratic vote, and nobody is the boss. All of these things combined with your knowledge would help you thrive.

Maybe you were already picturing yourself in Mad Max, but this analogy actually best describes what a DAO is. Today we will talk about how and why Stakeborg DAO appeared, the first Romanian crypto project that aims to become completely decentralized.

What Is Stakeborg DAO and How Did It Appear?

DAO is an acronym for Decentralised Autonomous Organisation and it represents an organization with rules dictated by a code through Smart Contracts.

Although the code is pre-established by the team that founded the organization, it is transparent and controlled by the members of the organization. The inventory and transaction rules are kept on a blockchain.

In a DAO, all members make submissions and vote based on how many tokens they own and no authority has control which is what makes it decentralized. If you want to learn more about DAOs or Smart Contracts, don’t forget to check our videos on those topics.

StakeborgDAO is the first Romanian project that wants to create a crypto community or a “digital colony,” as it is called in the 24 pages whitepaper.

The project was built on the Ethereum blockchain on which, despite the high fees, the usage of Smart Contracts guarantees safety and cements the level of trust of people who join in.

The goal was to put in contact a group of people whose collective knowledge can later be used so that this community can evolve without needing a central authority and so that it would be able to administer its own money.

In short, Stakeborg DAO is an organization that appeared from an already existing crypto community, the one surrounding the Stakeborg team, in which the participants have the same interests, work towards the same goal, share the responsibility of making decisions, and have the same system of values.

What Makes StakeborgDAO Stand Out?

The StakeborgDAO community and its economy have the ERC-20 STANDARD token as its basis. This was launched through a fair launch and it has a total supply of 20 million.

Taking part in the DAO is possible through the platform created especially for this, StakeborgDAO.com.

The first product launched was the index fund ILSI – Invest Like Stakeborg Index. Let’s talk a bit about this.

In order to reach the goal of a completely decentralized system, the team behind StakeborgDAO gathered participants in the community using the Fair Launch method.

This implies that all potential members of DAO benefit from the chance of getting involved and having the power to vote, as, in the beginning, there wasn’t anybody holding the Standard token.

This didn’t have a public sale so nobody could buy it, not even at a discount, as it happens with other crypto projects.

At first, if you wanted to own Standard, you had to get it as a reward for locking other assets in liquidity pools. The Standard token reached the market as a reward for Bond, XYZ, and Swingby pools which managed to create liquidity for the USDC/Standard pair for Sushiswap.

During the sixth week following the creation of these liquidity pools, the staking program began, an element which determined the growth of Standard rewards on the market. The token was therefore launched on Sushiswap where people could buy it from.

The distribution of the token is made via a combination of airdrops, a pre-established vesting program, and decided based on the activity of community members through yield farming and the staking program.

72% of the 20 million total of Standard that exists will go back to the community and only 28% will go to the team, advisors, or will be available to be bought by investors in late stages.

Once the staked Standard on the platform will surpass one million units, the DAO mechanism will be activated.

The entirety of the Standard allocated to the three airdrops or the one for the team will be vested gradually. Therefore, decentralization takes place because nobody begins their journey as the owner of a large sum of Standard which makes a monopoly impossible.

At the same time, those who got involved from the beginning are encouraged to keep the Standard they received, which helps maintain the price and thus consolidates the value of the token.

Through this platform, the StakeborgDAO members take part not only in the scheduled airdrops but in the entire farming process of the Standard token. The platform also includes essential resources for the community and even allows the putting into effect the Governance step.

Here you can read the whitepaper of the organization, its roadmap, you can meet the team members and analyze their qualifications or find all of their social media channels including those for Twitter, Discord, and YouTube.

This was created on the pattern of a classic index fund but it includes only a few crypto assets.

Let’s say you want to invest in several crypto assets simultaneously but your time doesn’t allow you to study ten different projects, find out all of their details, and buy all of their specific tokens.

An index fund does this for you because it offers you a single token which if you decide to invest in, by acquiring it, it will act as if you’ve bought all of the underlying assets on which that fund is based on.

If you’re familiar with the concept of derivatives, you will understand easier that the price of the token of an index fund based on 10 cryptocurrencies follows the price moves of those digital assets.

Therefore, ILSI offers you exposure to several coins at the same time with Bitcoin and Ethereum having the largest percentage, but it does all this on the basis of a single token. This can be purchased from Tokensets or Sushiswap and is rebalanced every three months.

This also means that if one of the tokens in the bunch will lose a lot of its value, the loss will be absorbed by the increase in the value of the other tokens in the fund. The set includes the following: WBTC, Ethereum, Terra, Chainlink, FTX Token, Enjin, Aave, Synthetix, dYdX, and BarnBridge.

The main goal of this token is to encourage the community and get its interest. It also offers exposure to crypto assets to those who wish to invest but haven’t the time to closely follow the market moves.

Aside from the fact that institutional investors are looking for index funds of this type, naturally, ILSI has another utility which is that in the future it will support the governance system for StakeborgDAO since taxes will reach the DAO treasury.

Those who own ILSI and add it to liquidity pools for the ILSI/ETH pair on Sushiswap are rewarded weekly with the Standard token.

Looking at the info on the project’s roadmap, we also understand that new index funds will continue to be launched.

The Advantages and Disadvantages of StakeborgDAO

Among the most important advantages, we can mention:

The high interest for decentralization – this can be seen in the fact that there was no pre-sale or public sale for the Standard token, choosing instead a fair launch.

The token distribution and the fact that the DAO mechanism will be activated by 1 million Standard tokens staked are solid arguments for decentralization.

The rewards program – as mentioned before, those owning BOND, XYZ, and Swingby, have received rewards for locking their tokens into liquidity pools on the StakeborgDAO platform.

There are also staking rewards from the USDC/STANDARD liquidity pool and, more recently, from the ILSI/ETH pair.

Useful financial instruments for those who want to learn about and invest in crypto – both the Standard token and the ILSI index fund are examples of decentralization. Their utility also has an educational feature as it helps investors understand better concepts such as Yield Farming, Liquidity Pool, and Staking.

The team shows transparency and professionalism – aside from efficient communication with the entire community, there are weekly materials published on the Stakeborg social media account, plus The Crypto Insider newsletter which indicates that those involved in StakeborgDAO know what DeFi is all about.

The StakeborgDAO Talks series on YouTube had important guests such as Vitalik Buterin, Nick Johnson, Kain Warwick, and Raoul Pal.

A dedicated community – aside from the Twitter and Discord followers and members, the StakeborgDAO community has already created a website, StakeborgDAO.xyz.

In this source, which is constantly updated, any person interested in the project can read informative articles but also daily reviews that touch on everything happening in the DAO ecosystem.

Meet-ups in different Romanian cities are also becoming a common occurrence for the community members.

The disadvantages and risks associated with StakebordDAO are:

Possible technical difficulties – like any projected coded open source and that runs on smart contracts there is a chance that you’ll encounter bugs and there is a risk of hacking. Still, the whitepaper mentions that the protocol went through several audits before being launched.

A possible centralization – the protocol is administratively controlled by an admin key secured by 2-3 multisig wallets. Naturally, this admin key allows the update of the code and smart contracts and, for extra safety, it can not be used to access the treasury funds.

Risks regarding the market or lack of liquidity – since the prices of index funds vary simultaneously with the assets they are representing, there is always a risk that is associated with any crypto activity.

Because they are included in liquidity pools on decentralized exchanges, in the case a pool runs out, it would be impossible to gain access to those assets as long as the pool isn’t replenished.

StakeborgDAO will have an important impact in the crypto world as it aims to become a completely decentralized system in which decisions can be made by members via voting. This can be expressed by members of the organization that own and use the Standard token.

Signs of decentralization like the fair launch of the Standard token and the fact that those who own it currently prefer to hodl it and use it for staking instead of using it for trading seems to indicate that this initiative may shortly become the first Romanian project of this kind to enjoy success.

Another good sign is the fact that even the community around the project has begun to organize itself, attracting more and more participants on the social media channels of the StakeborgDAO.

For us, the StakeborgDAO activity and the fact that they are actively helping the community to use the Ethereum blockchain and have contact with DeFi products is a plus and a source of inspiration.

cryptopedia
Previous articleWe Own A CryptoPunk!Next articleWhat Is Web 3?