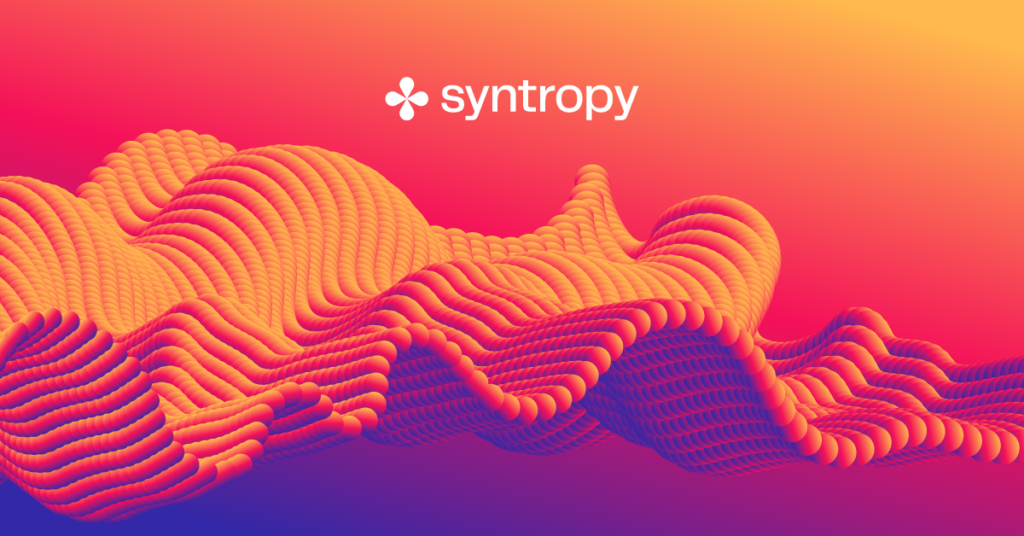 In this article, we are going to take a look at Syntropy, an alternative connectivity system for the public Internet that aims to solve the issues of the current Internet framework. We will cover some of its features and how it works.

Current Internet Challenges and the Solution from Syntropy

To understand Syntropy’s solution, we must first take a look at the problems of today’s Internet framework. Several factors make it inefficient and unreliable, including the misaligned economic incentives, the lack of outbound routing control, as well as the reliance on third-party security.

Needless to say that today’s Internet is highly centralized. Network routing is controlled by governments and large companies that provide infrastructure for the Internet. All this leads to security, governance, privacy, and resource utilization issues.

Entropy is generally defined as the tendency towards complexity and therefore as chaos and randomness. Syntropy can be seen as its opposite, namely, balance and symmetry, and that’s what Syntropy aims to achieve: order within randomness.

The Internet it envisions is syntropic and doesn’t require a complete replacement of the current Internet. What Syntropy does is come up with a technology that is compatible with the current Internet infrastructure and its protocols. As we will see, this technology uses the underlying infrastructure and its strengths, as it operates on top of it. However, it does so while removing bottlenecks and incorporating optimization and security by default.

As described by the team, Syntropy delivers a new connectivity layer for the Internet that bridges the gap between Web 2.0 and Web 3.0. It combines blockchain technology, encryption, and optimized routing to provide a more user-centric and secure Internet experience.

Simply put, it aims to decentralize the Internet without sacrificing compatibility with the current protocols and to enable people to govern the Internet. 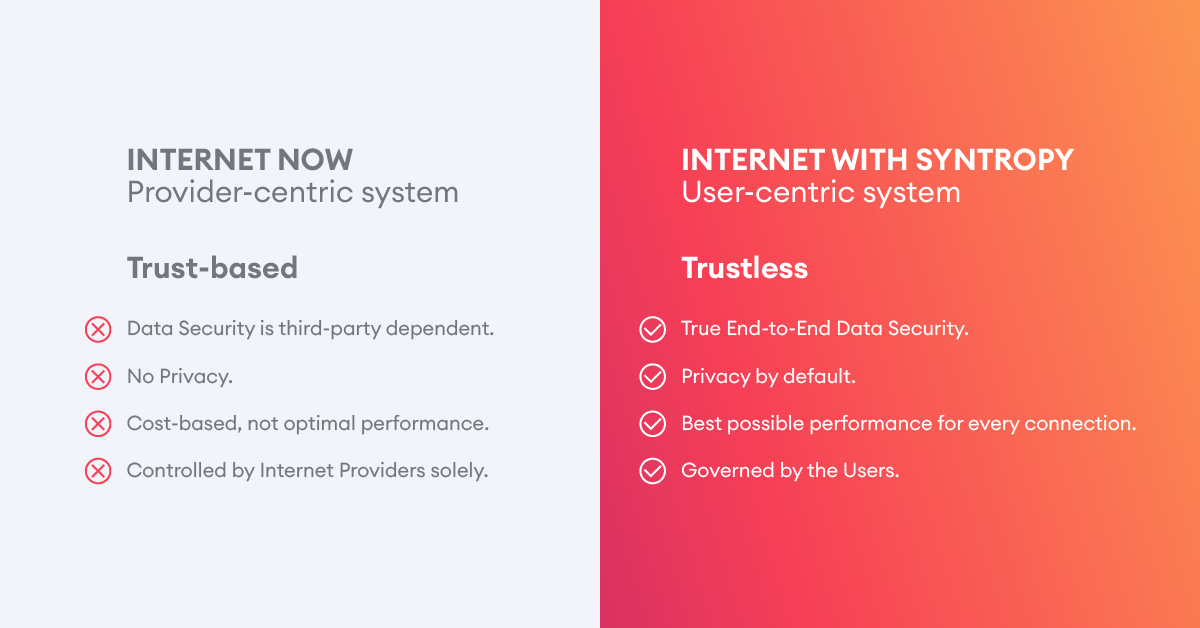 Syntropy seeks to facilitate a self-regulating bandwidth economy so that everyone can monetize their connectivity. In short, in this overlay network, bandwidth resources can be shared between all participants in a decentralized way using a cryptographic token. Basically, a device, such as a PC, an IoT device, or a virtual private server, can connect to the Syntropy network and share its bandwidth with other nodes.

A digital token economy and the pay-per-use pricing model can thus enable this open Internet economy while aligning goals between all Internet participants, namely, ISP (Internet Service Providers), content providers, and users. The tokenization of bandwidth resources not only ensures that incentives are better aligned for all participants but also makes it possible to create high-value connections in a cost-effective way.

The Technology Behind Syntropy

To achieve all of the above, Syntropy comes with an innovative combination of technologies. One of them is the Decentralized Autonomous Routing Protocol (DARP). Developed by Syntropy, this protocol makes it possible for nodes to connect into an encrypted, secure, and automatically optimized virtual mesh network that acts as an alternative connectivity layer.

One of its advantages is that it removes the third-party security risk associated with the use of a certificate or cloud service provider. Since all communication is end-to-end encrypted using WireGuard technology and only the end-points themselves can decrypt their messages, it establishes user-owned security instead.

To address the performance problems of the currently used Internet-routing protocols, DARP was designed to optimize the mesh network to contain only the best performing and most stable connections based on route latency, node uptime, packet loss, and bandwidth capacity.

Once connected to the Internet, the user can query the system for better alternatives to the public Internet path between source and destination via the Syntropy network. Therefore, this network ensures trustless encrypted connectivity and performance services for a wide variety of applications and use cases.

As we’ve said, Syntropy is a combination of Internet routing and blockchain technology, and the Syntropy chain is an enterprise-grade blockchain built on Substrate for network security and performance management.

It implements the Nominated Proof-of-Stake consensus, which is a hybrid consensus that includes two parts: GRANDPA (Ghost-based Recursive Ancestor Deriving Prefix Agreement) and BABE (Blind Assignment for Blockchain Extension). Within the Syntropy network, payments and validity of service delivered are confirmed and governed by this consensus.

Then there’s the Syntropy Stack, a collection of tools and libraries that will enable non-professional users, developers, and DevOps to fully automate the deployment of their applications on the Syntropy network. It helps establish secure and globally optimized connections between any two or more machines instantly.

So anything that can connect to the Internet can connect through Syntropy, including devices and applications alike, such as IoT networks, decentralized protocols, services, and data center infrastructures.

This makes Syntropy suitable for many applications, including blockchain, gaming, IoT, and DevOps applications. Syntropy has already launched several integrations with Chainlink, Polkadot, Ethereum, Ethereum 2.0, Bitcoin, as well as an official integration with Elrond, and many more are coming. 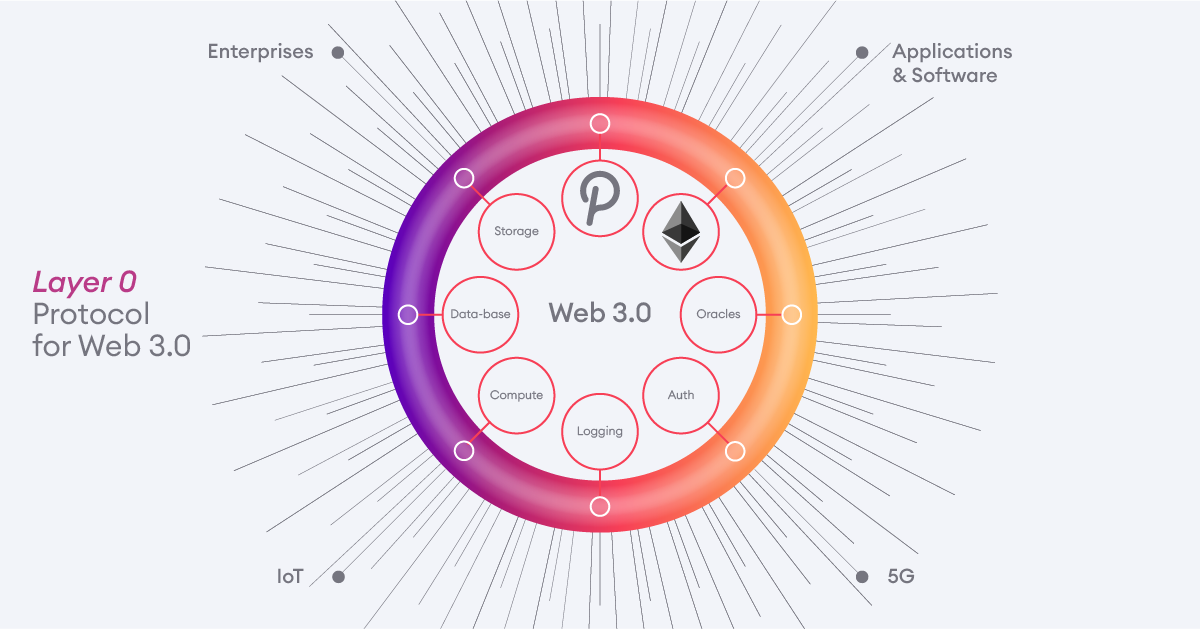 Syntropy network participants can have one of the following roles:

The Syntropy token is NOIA, an ERC-20 token, which serves as “Gas” for connectivity over the network. So all the data and connections sent through any device are accounted for in tokens. It has a maximum supply of 1 billion NOIA coins and a circulating supply of approximately 480 million coins. At the time of our research, the NOIA price was $0.4 and the market cap stood at the $200 million level.

The token plays a central role as it unlocks the trustless advantages of Syntropy. The ways NOIA is used can be grouped as follows:

So the NOIA token derives value from the usage of secure and optimized Internet traffic. It is listed on several exchanges, including KuCoin, Uniswap (V2), Bancor Network, Nash, and Gate.io.

For example, William B. Norton, Syntropy co-founder and Chief Technical Liaison, previously worked as the manager of the Internet Engineering group at Merit Networks, University of Michigan, and was a chief scientist in Console Connect Inc.

Jonas Simanavicius, who is co-founder and CTO at Syntropy, previously worked as an associate applications developer at JPMorgan Chase & Co. You can find more about the work experience of each team member on the project’s official website.

The project benefits from a strong community, having reached 33k followers on Twitter, 10k members on Telegram, and 11k followers on Facebook.

Syntropy also recently launched the Amber Chain, a proof-of-authority (PoA) version of the Syntropy chain, thus being one step closer to the launch of the Syntropy Blockchain.

With the initial development phase behind, the team members are working on releasing several features and upgrades as well as on a complete roadmap for the upcoming year. According to their Medium page, Syntropy will launch its staking dashboard this month and release a Syntropy Stack update.

Syntropy is an innovative project that aims to provide companies and people worldwide with an all-encrypted, performance-focused Internet. It combines technologies that increase internet connection speeds more than tenfold and considerably improve security, privacy, and reliability. Syntropy operates on top of the public Internet and is completely open, providing access to the network via a web-based platform.

Given that all connections are encrypted, the software stack runs directly on top of the public internet, and no extra hardware is needed, Syntropy’s use cases come in plenty and span multiple industries. Even though it still has important milestones to reach, this project is worthy of attention.