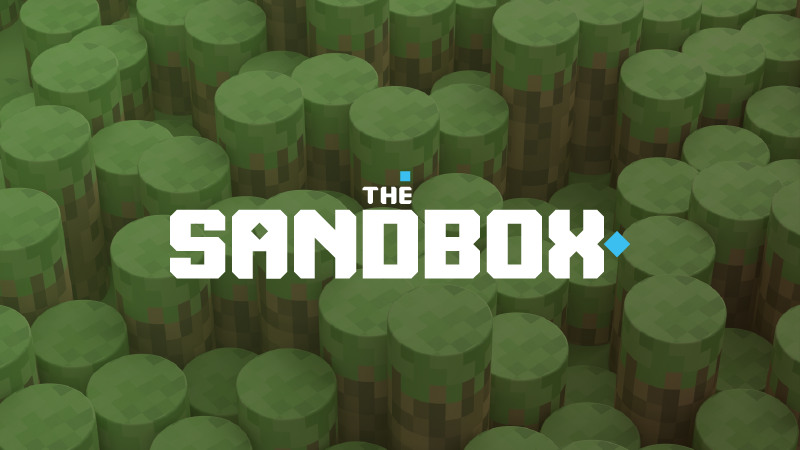 In this article, we will take a look at The Sandbox, an Ethereum-based virtual world that allows players to create, buy and sell assets in the form of NFTs. What makes it stand out is that the way it was designed and how it works make it possible for actual ownership of every content created to be granted to creators and not to developers and publishers.

What Is The Sandbox?

The Sandbox has been around since 2012 as a regular Windows, iOS, and Android game but moved towards blockchain when acquired by Animoca Brands in 2018. It was founded by Sebastian Borget, currently the Sandbox CEO, and Arthur Madrid, COO. The project aims at offering an immersive metaverse in which virtual worlds and games are created collaboratively and without a central authority.

The Sandbox is all about its users’ creativity and concentrating power and ownership in the hands of its users rather than its developers.

In this virtual ecosystem, players can design characters and worlds, create various narratives and adventures, and build digital assets they can then trade with other players. These creations can be placed on LANDs, pieces of virtual land. What’s more, creators can also develop interactive levels that other players can play once they pay an admission fee.

There are three integrated tools that power the game:

However, not only creators get to profit from the game, as players can also earn rewards and tokens by playing. Basically, The Sandbox offers players and creators the tools they need to easily create voxel worlds and game experiences, as well as the possibility to safely store, trade, and monetize their creations through blockchain.

It uses different types of tokens, as follows: 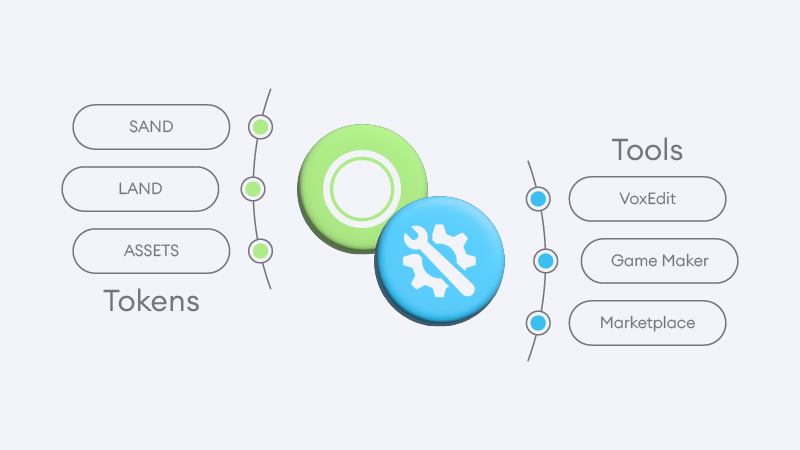 When it comes to NFT metaverses, The Sandbox, Decentraland, and Upland are the main contenders. While Upland is still in its infancy, Decentraland has gained quite some traction.

Even if the two are similar in concept, one key difference is that, in The Sandbox, the total number of LAND parcels is limited to around 166,000, so it is much more focused on the concept of digital real-estate, with the players and creators having more responsibility of the in-game metaverse.

Then, while Decentraland uses only the ERC-721 standard, The Sandbox plans to support and implement the ERC-1155 standard in the game in collaboration with Enjin, including the ERC-721. What this means is that the latter is compatible with more tokens, so The Sandbox users will have the possibility to benefit from more diverse NFTs available in-game.

Even though Decentraland benefits from greater adoption, The Sandbox has also secured partnerships with over 50 brands in digital entertainment, such as The Smurfs, Atari, and CryptoKitties, which have created voxelized versions of their own worlds and popular characters on Sandbox lands.

As far as the platforms’ tokens are concerned, both MANA and SAND have experienced gains lately, sitting around the $2.70 and $2.50 levels, respectively.

It is enough to take a look at the project’s recent events to understand its place in the metaverse sector and its potential. The Sandbox has raised $93m in a Series B funding round led by SoftBank’s Vision Fund 2. The funding will be used to accelerate the development of The Sandbox metaverse, and the event led to $SAND reaching its ATH of $3.33.

This year has been more than fruitful for the project as its user base has grown 500%, with over 30,000 monthly active users.

Another announcement that is worth mentioning here is the one made by The Sandbox in June, namely that it would switch to Polygon’s Layer 2 in order to reduce the carbon footprint of NFTs by up to 99%. It will also work with WeForest to help reforestation efforts across the globe.

Then looking at what the project has delivered so far and its roadmap, one can easily see how well-thought-out the entire project is and how serious they are about future developments and improvements.

According to the roadmap, the last quarter of this year should bring the launch of Layer 2 dual-chain solution on Matic and the full opening of the marketplace for UGC (user-generated content). The first half of 2022 is expected to see the launch of the DAO with staking and voting mechanisms for SAND, LAND, and AVATAR holders.

The Sandbox is a virtual Metaverse where players can play, build, own, and monetize their virtual experiences. Given that its aim is to make the game a DAO, so, to be controlled by players for players, it has secured noteworthy partnerships, and it brings a way for creators and players alike to earn while doing what they like, we can only commit to keeping an eye on it.

What do you think about The Sandbox? Could it be a serious competitor for Decentraland? Let us know your thoughts on this in the comments section.