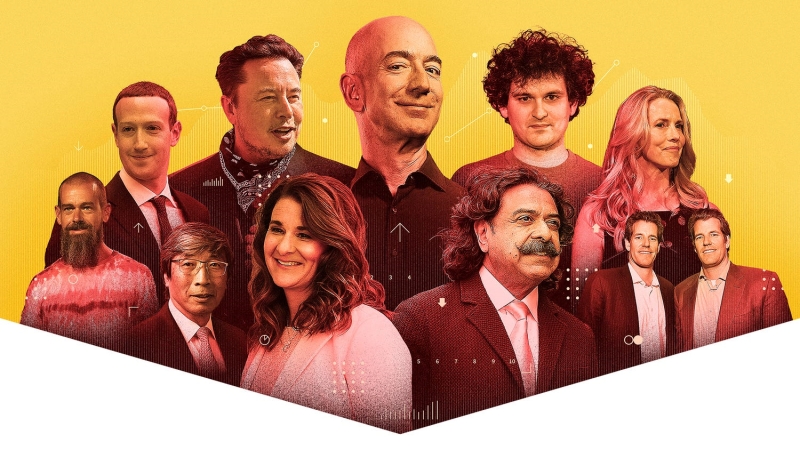 Crypto is here to stay, especially for the big players out there and we all know there are influential people who support Blockchain technology.

The ones that managed to earn billions, know how to grow their fortunes and especially how to take care of their money during hard times. These people are certainly visionaries.

If I aroused your curiosity and you wanna know who made billions out of crypto, here are the most famous people that did it.

Well, let’s talk about the 40-year-old twins, Tyler and Cameron Winklevoss, founders of Winklevoss Capital Management and the Gemini exchange.

They’re number five on our top list and their estimated crypto fortunes are of $4 billion each.

The two brothers stated they bought 11 million dollars worth of Bitcoin in 2013, some even for the price of $10.

They also own the Nifty Gateway platform, where users can buy, sell or auction NFTs.

During an interview in 2014, they stated their conviction that Bitcoin’s market cap will surpass Facebook’s – well, they were right.

Let’s move on to Barry Silbert, founder of Digital Currency Group, an investment group that owns brands such as the Coinbase exchange, Coindesk news platform, Brave browser and the Grayscale Bitcoin Trust – where he manages over 645,000 BTC, now valued at over $26 billion.

Well, Silbert didn’t manage to amass such an impressive fortune for himself, having only $3.2 billion he made from buying Bitcoin for the first time in 2012.

His plans are to accelerate the development of a better financial system through Digital Currency Group and for the company to become the “epicenter of the bitcoin and blockchain industry.”

In 2020, Michael Saylor, the CEO of Microstrategy announced his intention to invest a part of the company’s profits in Bitcoin. Well, the man was not joking around since it currently holds over 125.000 BTC.

Microstrategy is now the company with the largest amount of Bitcoin in its portfolio, followed by Tesla and Galaxy Digital.

This is surely something you’ve heard before, but let me tell it again: Michael Saylor is a Bitcoin Maximalist, stating that Bitcoin has a finite supply of 21 million coins and thus is more of a “rarity” than a “commodity”. This means that, in the future, those who own it will only have to gain.

Speaking of winners, Jack Dorsey, co-founder and CEO of Twitter until 2021 is penultimate on today’s list, but don’t worry, we’ll get to the most influential man in crypto immediately.

In 2020 he founded Square – a company that offered payment services for smartphones.

After leaving Twitter Dorsey changed the company’s name from “Square” to “Block,” proving how involved and interested he really is in Blockchain technology.

Block currently holds over 8,000 BTC. Jack said during an interview that blockchain technology is the most important branch of his professional life and that he thinks Bitcoin will end up replacing the Dollar in the future.

Last but not least we move on to …  Elon Musk, the founder of Tesla, SpaceX and Neuralink. He is known for having a strong influence in the crypto space.

On April 2, 2019, he tweeted about DOGECOIN, and yes, you’ve guessed it,  the value of the coin doubled and now it’s 0,15$. So we can say that a part of dogecoin’s success is also due to Elon Musk’s influence.

Recently, he bought 9.2% of Twitter shares, thus becoming the main stakeholder. Twitter is the preferred platform of crypto users, and Elon’s investment may be an important step in accelerating adoption.