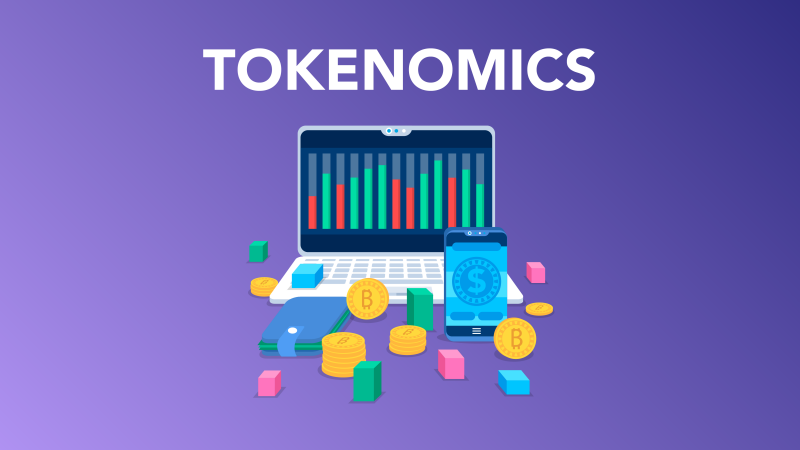 Let’s find out where this catchy term came from and what it refers to.

“Tokenomics” is a relatively recent term based on the words Token and Economics. It refers to how the economy around a crypto token is imagined.

Taking into consideration the fact that, in general, tokens are very different among themselves, in order to make comparisons between them it is useful if we have a frame through which to better understand their functionality and utility.

Through tokenomics, all qualities of a token are expressed, everything that makes it attractive for investors. This can be found in the whitepaper of any crypto project, including info about the token’s functionality, objective and allocation policy.

The allocation and distribution of tokens is usually a strategic decision which can be found in the project’s whitepaper as a pie chart that contains info regarding who will receive the tokens and how they will reach the market.

Generally speaking, there are two ways through which the majority of projects choose to distribute their tokens: via a fair launch or through a method known as pre-mined.

A fair launch takes place when a cryptocurrency is mined, owned, and governed completely by the community. This is why, in this situation, there is no pre-sale or private allocations before the public launch.

In the pre-mined method a quantity of tokens is created and distributed before the public launch with the goal of raising capital. This quantity is sold to potential buyers as part of several events known as ICO – Initial Coin Offering; IEO – Initial Exchange Offering andIDO – Initial Dex Offering.

Token Supply generally refers to the quantity of tokens available in a certain project and how that number will change in the future.

In particular cases we can reference several types of existing Token Supply, such as Circulating Supply which represents the quantity of tokens existing in circulation currently and that can be traded.

Total Supply refers to the total quantity of existing tokens that are either in circulation or stuck in different smart contracts and released at a later date as part of events such as ICOs ori various airdrops.

Some projects don’t have an upper limit which means that the token total supply will grow in time. Other projects have a fixed token supply with the best-known example being Bitcoin and its limit of 21 million.

The Max Supply refers to the total quantity of tokens in a project that will exist.

Once the max supply was reached, the possibility of creating or minting new tokens will cease to exist.

In the blockchain industry, market capitalization or market cap refers to the total value of tokens in circulation at any given moment.

This is calculated by multiplying the total volume of tokens in circulation with the current price of said token.

This is the most used indicator used to determine how much a cryptocurrency is dominating the market and in order to understand its growth potential.

At the same time we must take into consideration the fact that the market cap is closely tied to the price of an asset and doesn’t objectively reflect the value of the company or the asset in which we are investing.

I write a smart contract and list it on an exchange. Later, I convince a friend to buy the token for the price of $1.

Instead, classifying projects based on the size of the market cap can be helpful in the decision-making process of investing or not in a certain asset.

Despite the high volatility which is still a thing, projects that have a high market cap are considered to be a low-risk investment because they are stable, have shown a sustainable growth over time, and have high liquidity.

Projects with a medium market cap that haven’t reached the $10 billion threshold have a slightly higher investment risk but usually may offer higher rewards for those who invest in them early.

For those looking for risky projects but with a high profitability rate then those with a low market cap can be very attractive.

When it comes to the token model, we have to make sure if said token is the inflationary or deflationary type.

An inflationary token that doesn’t have a limit for the maximum supply will continue to be a product forever. An advantage of this model is the fact that it is well-known and studied because it resembles the economic model of FIAT currency.

A disadvantage would be the fact that it favors inflation and its devaluation.

On the opposite side we have the deflationary token with a limited maximum supply without the possibility of modifying this limit. As an advantage, a limited offer of tokens generates a natural demand as the token offer on the market drops.

It further eliminates completely the threat of inflation that affects FIAT currencies. As a disadvantage since there is a limit to the number of produced tokens, owners are encouraged to stock tokens and not spend them.