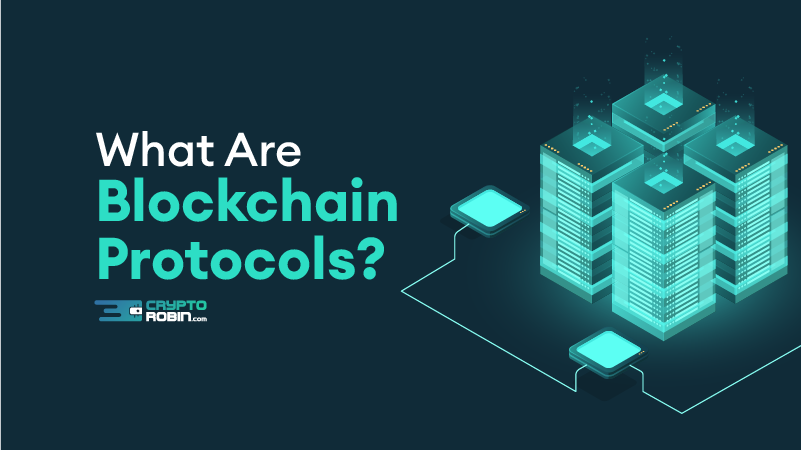 In this article, we will find out what a Blockchain Protocol is, what are some examples of such protocols, and what importance they have for the crypto area.

What Are Blockchain Protocols?

Protocols are basic sets of rules that ensure data sharing between computers or computing systems. In the case of cryptocurrencies, they set out the structure of the Blockchain – and the rules for managing the distributed database, which will guarantee that assets are traded securely online.

So, when it was published, the Bitcoin Whitepaper pointed out a set of computing rules, establishing a new type of distributed database called Blockchain. This was to function as a ledger, or distributed ledger, tracking every Bitcoin transaction.

At the same time, it was established that the Blockchain would be self-verifying – being constantly managed and secured, based on the computing power of the entire network.

In this context, “Miners,” that is, those whose computers are in charge of the maintenance of this chain of blocks, would be rewarded in Bitcoin. Collectively, these rules form the Bitcoin protocol, so literally, they are Bitcoin, as we know it today.

By extrapolation, protocols will not apply exclusively to cryptocurrencies but are fundamental to how any network of computer systems works, such as the Internet.

What Bitcoin has shown is that money, in its digital form, can be exchanged safely on the internet.

Why Are Protocols Essential for Blockchains?

Protocols are of key importance in Blockchain because:

The rules established by protocols have evolved to cover a wide range of functions and solve various dilemmas, which is why there are now many cryptocurrencies, each with its own protocol.

What Concepts Underlie the Blockchain Protocols?

The most important concepts around which Blockchain protocols are built include:

Proof of Work – It is a string of data that would be difficult to recreate by a single computer but easy to check by external parts of the same network.

It is the PoW consensus mechanism that makes Bitcoin mining difficult, but it allows any computer connected to the Blockchain network to prove that those new cryptocurrencies have been validly created and also confirms the validity of the transactions.

Distributed Ledger – This is the publicly visible history of all transactions, which anyone can verify, in most crypto projects.

Smart Contracts – They automate transactions and facilitate digital trade, allowing contracting parties to program all the procedure conditions prior to the transaction.

When both contracting parties meet all the conditions, the agreement is confirmed in a fraction of a second. You can learn more about that by watching our article on this topic.

51 Percent Attack – All crypto projects based on distributed ledger technology are theoretically vulnerable to an opponent who would gain control over 50+1% of network participants.

For large projects such as Ethereum and Bitcoin, 51% attacks are not feasible, but they can happen in the case of smaller blockchains.

What Are the Most Well-Known Blockchain Protocols?

Here are some of the main protocol types:

It can be defined as a peer-to-peer value trading system based on public key cryptography, which allows individuals to make financial transactions with each other, without being managed by any third party. Transactions are irreversible and possible without the risk of double-spending.

Ethereum enables the transfer of funds and also stores the registers, allowing the development of decentralized applications, dApps, on its blockchain. Its main functions are performed based on Smart Contracts, which run on the network and require minimal interference from third parties.

It uses a distributed open-source consensus ledger and also supports fiat, other cryptocurrencies, or other assets. Its core function is to enable banks, payment providers, and digital asset exchanges to send money globally.

Hyperledger is an open-source project created to promote cross-industry blockchain technologies. So it brings together leaders from a variety of industries – including finance, manufacturing, technology, and IoT – and provides support for international commercial transactions, supply chain businesses, and technology services.

It aims to help for-profit corporations create private Blockchains so as to facilitate more efficient internal transactions and develop applications for the PoW systems on which the Blockchain technologies are based. It is designed to work alongside fiat currencies and physical deposits of value.

Openchain is an open-source distributed ledger technology that provides support to organizations to issue and manage digital assets. For example, it can provide support to a start-up company that sells security tokens or equity tokens.

Unlike other protocols, it allows what we call Partitioned Consensus, which provides users with the possibility to create unique instances that will have a single authority.

In the field of computing processes, protocols are rules that define how data can be transferred between different computer systems.

They are also essential components of Blockchain technology because they enable the automatic sharing of information in cryptocurrency networks in a secure and reliable way.

Currently, there is a wide variety of cryptocurrencies, some of them even developing their own specific protocol.