In this article, we will explain what the Federated Byzantine Agreement is and how it works. We will also briefly cover its pros and cons.

To understand the Federated Byzantine Agreement (FBA), we must first take a look at Byzantine Fault Tolerance (BFT). Fault Tolerance is the feature that allows a system to continue to function correctly in the event of one or more failures occurring, within some of its components.

The quality of the way the system operates may not decrease at all, or the decrease may be proportional to the severity of the failure. In comparison, in a system designed without this feature, even a minor failure can cause a total collapse.

When it comes to Blockchain, this refers to a network’s ability to protect itself from failures that derive from the Byzantine General’s problem and make it more challenging to achieve a consensus. For example, such failures could be network congestion or disconnection, malicious attacks, or incorrect request processing.

A Byzantine Fault Tolerant system is able to continue operating even if some of the nodes fail to communicate or engage in malicious behavior.

There are several ways to build a Byzantine-tolerant blockchain, and they are related to the different types of consensus algorithms, that is, the mechanisms through which a blockchain reaches consensus. For example, Bitcoin’s solution for Byzantine fault tolerance includes atomic broadcasting and public-key cryptography.

Many blockchains have implemented some sort of BFT. The traditional Byzantine agreement is a good example. In this case, the agreement is reached when a certain minimum number of nodes, known as a quorum, agree on the solution to a given problem. While such a consensus is fast and efficient, it sacrifices decentralization to achieve these characteristics as membership in Byzantine agreement systems is set by a central authority.

Here is where the Federated Byzantine Agreement (FBA) comes in, which is a decentralized alternative to BFT. So let’s dive deeper into what FBA entails.

What Is Federated Byzantine Agreement and How Does It Work?

In a BFT system, there must be a list of recommended validators, which is defined by a central authority, typically the company behind the protocol. Even if anyone can spin up a validator, only those the authority adds to that list can participate in consensus. So, such a system features a centralized, closed membership.

In FBA, there is no such list chosen by a central authority. Instead, the nodes (validators) choose the other validators they trust, and their list of trusted nodes is known as their quorum slice. In a system of this type, several quorum slices will overlap and thus form a quorum, which is the number of nodes required to reach an agreement within the system. The system-wide agreement is reached when overlapping quorum slices communicate the transactions.

Without a central authority to decide on the recommended validator list, FBA creates an open membership network. This means anyone can run a validator and participate in the network’s consensus as long as any other participating validator adds them to their quorum slice. This further allows for decentralization as more and more nodes can be added to the network, promoting organic network growth.

The Ripple blockchain pioneered the FBA consensus mechanism, but the Stellar blockchain refined it and successfully implemented the first safe and secure FBA. 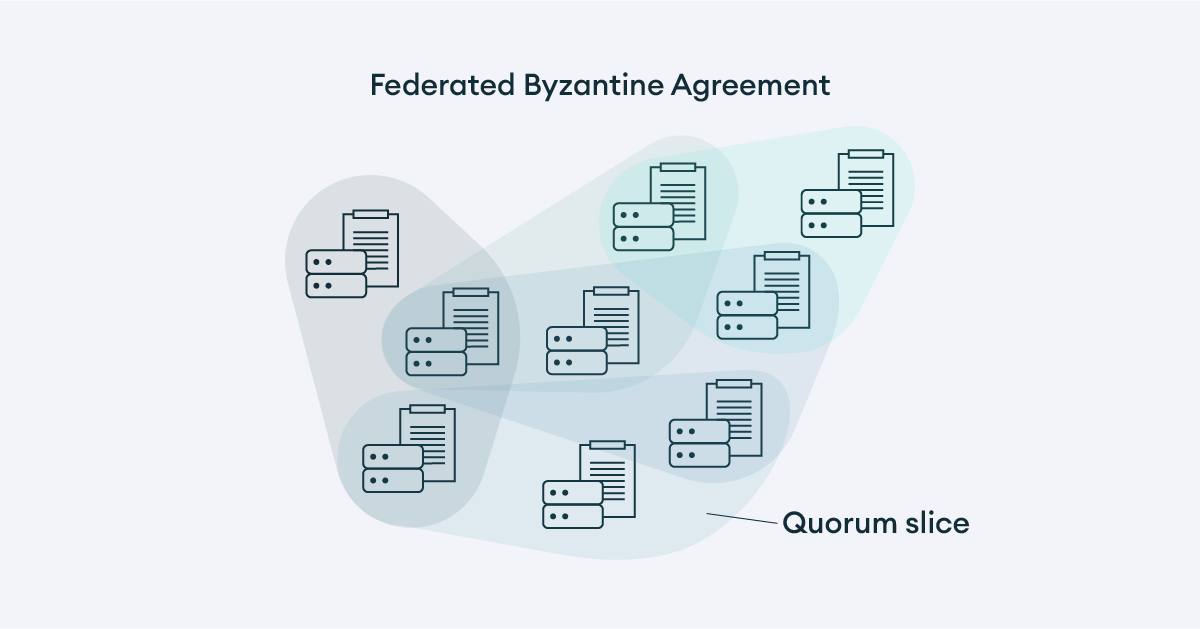 Pros and Cons of FBA

Some of the advantages of FBA include the following:

However, a disadvantage is that trust among participants is required. Then, some experts consider that quorum slices can actually lead to centralization, which is the opposite of what an FBA system tries to achieve.

To sum up, the Federated Byzantine Agreement is a decentralized alternative to the traditional Byzantine agreement. An FBA ledger can be accurate as well as up-to-date even if not all nodes agree.

The quorum formed from the choices of each node is the one that convinces the entire system of agreement. Given that there is no central authority, anyone is free to join the network. Examples of well-known cryptocurrencies that use the FBA include Stellar and Ripple.