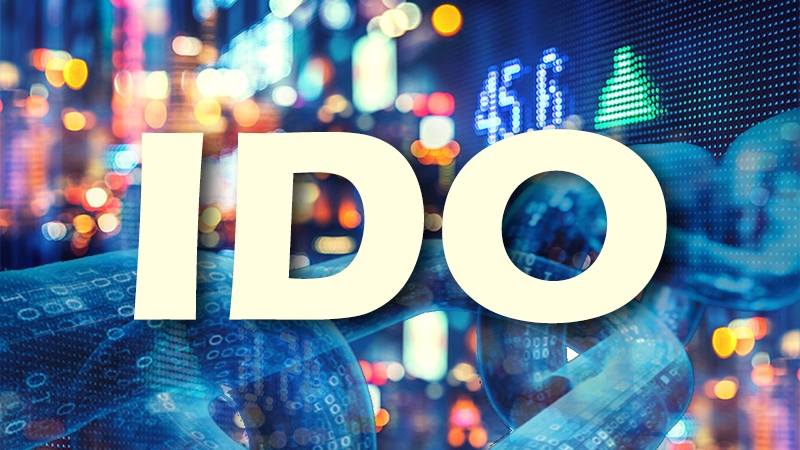 Let’s say there is a struggling indie artist, Marina. She makes wonderful music with catchy beats and deep lyrics. So she wants to release an album for more people to hear it. But there is just one problem – releasing an album costs money, and Marina knows that.

So in order to be able to record the album and release it, she starts a special fund for donations from fans. Everybody can pitch in and help Marina release her debut album.

But what’s in it for the fans? You can’t just share money willy nilly like that. So, in exchange for this, Marina is offering the fans her album, or tickets to see her in concert.

Basically, this is how an IDO works as well. It is a fundraiser which helps a project release a token through a decentralized liquidity exchange.

What Is IDO In Crypto?

An Initial DEX Offering (IDO) is a fundraising method through which a project launches a coin or token via a decentralized liquidity exchange. This type of crypto asset exchange relies on liquidity pools where traders can swap tokens.

A project that issues initial DEX offerings receives financing from individual investors, just like how we mentioned in our example.

IDOs can be created for a variety of projects, ranging from cryptocurrency to music albums.

They share a few similarities with initial exchange offerings (IEOs). Both models aim to raise money to bootstrap a project and allow immediate trading on top of raising funds.

The first-ever IDO was introduced by Raven Protocol, in June, 2019, and listed on Binance DEX.

How Does an IDO Work?

The way an IDO works is relatively simple. A project appeals to the general public for fundraising through a platform or launchpad that offers IDO services, such as Uniswap, Binance DEX, and Polkastarter.

If the project meets the launchpad platform’s requirements, it is selected to conduct an IDO.

Investors then buy IOUs of the token to be launched. An IOU stands for acknowledgment of debt. Basically, they pay for the tokens in advance and receive them upon the Token Generation Event.

Once these stages are completed, the token is immediately listed for trading on a decentralized exchange.

Most tokens are based on the ERC20 protocol standard since many projects are still built on Ethereum.

With the problems that Ethereum is facing, do you think this will continue? Or will things move in favor of other projects, like certain Ethereum killers? Let us know in the comments.

One of them is open fundraising. Since there is no need for CEX and permission to start fundraising, anyone can organize and participate in IDOs.

Immediate liquidity and instant trading also stand out since IDOs provide immediate access to liquidity and trading, unlike IEOs and ICOs, which involve an initial waiting period.

We can’t forget Lower costs either. For example, if a project uses a decentralized liquidity exchange for its initial offering without an intermediary, it only pays the “gas” fees for deploying a new smart contract.

IDOs are not free of drawbacks. One of their disadvantages is a Lack of control mechanisms. This means that fundraisers have no control over who buys tokens and how many they buy.

No integration with Know Your Customer (KYC) capabilities is another con since personally identifiable information for investors is not recorded.

Immediate price movements and Liquidity rug pulls are two other cons that stand out because these are malicious maneuvers where crypto developers abandon the project and run away with the funds raised from investors.

We hope Marina doesn’t pull a sneaky and run away without giving us our money!

An IDO represents a fundraising method through which a project can release a coin or token using a decentralized liquidity exchange. This type of crypto asset exchange relies on liquidity pools where traders can swap tokens.

A project that issues initial DEX offerings receives financing from individual investors based on how interested they are in a certain project.

An IDO comes with many advantages, such as immediate liquidity and instant trading, and lower costs, but it also has its cons, such as a lack of control over who buys how many coins.