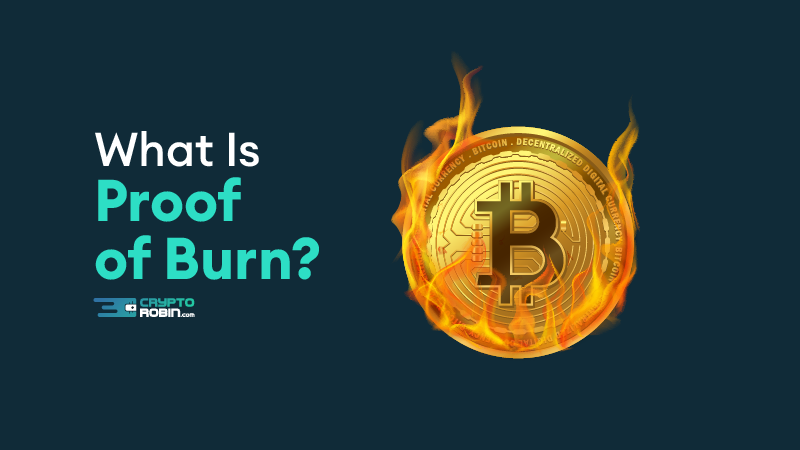 In this article, we will explain what Proof of Burn is and how it works. We will also briefly cover its advantages and disadvantages.

What Is Proof of Burn?

Blockchains use consensus mechanisms to ensure that all participating nodes reach an agreement regarding the valid state of the network. So, consensus mechanisms are used to keep a network secure and to verify and validate transactions. You can learn more about this concept in our article on this topic.

Most blockchains use the Proof of Work or Proof of Stake consensus mechanism, but a possible alternative to them is being tested, namely, Proof of Burn.

In the case of platforms that use PoB, miners reach a consensus by burning coins, a process through which cryptos are permanently eliminated from circulation. In such cases, the mechanism is used to validate transactions. When compared to PoW, the PoB consensus mechanism has reduced rates of energy consumption.

There are different versions of PoB, with the most acknowledged version being the one of Iain Stewart, the inventor of the POB algorithm. Depending on the implementation, miners either burn the blockchain’s native currency or the currency of an alternate chain, such as Bitcoin.

How Does Proof of Burn Work?

In PoB networks, the block validation process doesn’t require powerful computational resources and therefore doesn’t depend on powerful mining hardware such as ASICs.

Instead, PoB uses virtual mining rigs to validate transactions. Simply put, users perform coin burns, thus showing their commitment to the network and gaining the right to mine. This process involves sending coins to an “eater address.” This is a randomly-generated public address that is verifiable and viewable but inaccessible as it has no private key associated with it.

Therefore, the number of burned coins shows the user’s virtual mining power, so the more coins they burn, the higher this power and the greater the speed of finding new blocks. This further means that miners who have these benefits can also get higher rewards.

So, PoB blockchains are secured by this investment made through coin burns. The burning process doesn’t consume many resources; that’s why it is considered a more sustainable alternative to PoW.

Blockchains that use this consensus mechanism provide block rewards to miners in the currency of the blockchain.

Advantages and Disadvantages of Proof of Burn

The PoB mechanism has been designed to solve some of the issues of other consensus mechanisms and thus has the following advantages:

However, PoB is not free of drawbacks.

Often referred to as a PoW system without energy waste, Proof of Burn is a consensus mechanism that operates on the principle of coin burning. Miners who participate in such a system burn virtual currency tokens and, in turn, gain the right to write blocks in proportion to the coins they burned.

PoB is used not only to address the high energy consumption issue of a PoW system but also to deter fraudulent activity on the blockchain that utilizes it, increase network security, and improve a blockchain’s functioning as a tool for transactions.