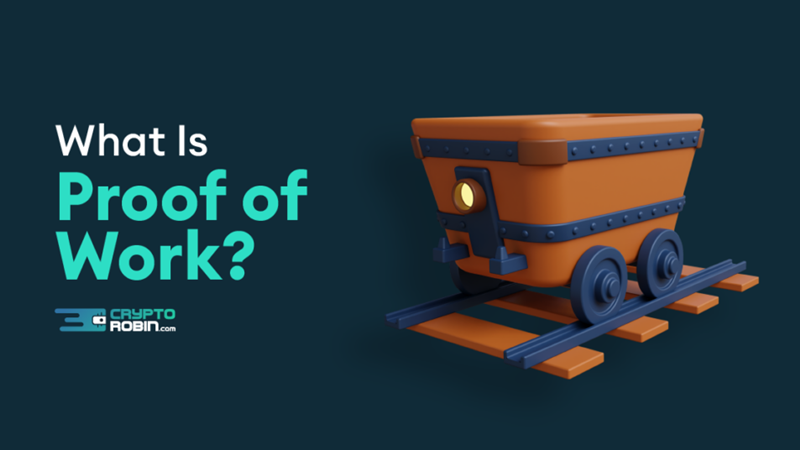 In this article, we will explain what the consensus mechanism Proof of Work is and what role it plays in a blockchain, plus its advantages and disadvantages.

What is Proof of Work?

In a blockchain, proof of work represents the method of confirming a transaction and producing new blocks for the chain. Miners are those who are in charge of confirming the transactions and arranging the blocks. They use CPUs and special electronic circuits in order to solve complex mathematical puzzles, which leads to an increased level of energy consumption.

Miners are competing against each other to solve the puzzles. The winner gets to update the blockchain, verifying the most recent transactions and receives a predefined quantity of cryptocurrencies.

Bitcoin was the first blockchain to ever use this type of consensus mechanism and others followed suit, such as Ethereum. Currently, many networks are making a move towards proof of stake.

What Role Does Proof of Work Have?

Proof of Work is used to stop users from generating too many cryptocurrencies or tampering with them. It is also used to stop double-spending, a risk associated with digital currencies. If anybody could spend their coins more than once, the currency would be utterly useless.

In a centralized financial system, the bank or exchange that supervises the system monitors how much money each individual owns. If Alexis sends $1 to Luis, the exchange deducts $1 from Alexis and offers Luis $1.

But in a decentralized system, therefore, in the world of crypto, such an entity, that would act as a bank, doesn’t exist. This means that proof of work is needed to stop people from stealing or tampering.

What Are the Advantages of Proof of Work?

Proof of work has several important advantages, especially when it comes to Bitcoin.

For example, this consensus mechanism has already proven that it can be a sturdy method of keeping a secure decentralized blockchain.

In order to commit transaction fraud in a blockchain, a bad actor would have to corrupt 51% of its nodes, which would translate into the misuse of this percentage as hash rate or processing power.

As the value of a cryptocurrency increases, a larger number of miners are incentivized to join the network, thus making it safer and giving it more power. As a result of the processing power used, it’s not viable anymore for a bad actor to try and meddle with the blockchain.

What Are the Disadvantages of Proof of Work?

One of the main cons of proof of work is the high use of energy. According to some studies, because of proof of work, Bitcoin is using as much energy as a country like Switzerland. Then again, we should remember that a percentage of that power is actually harmless renewable energy.

51% attacks are another problem. As we previously mentioned, if someone is able to accumulate 51% of Bitcoin’s mining hashrate, the entity would have the power to flout the rules for the moment, either for double-spend or even for block transactions. Examples of these attacks are those against Krypton, Shift, and Bitcoin Gold.

These problems are why some have decided to move to proof of stake.

Since public blockchains operate in a decentralized manner, there is no authority figure, which means that a consensus mechanism is needed in order for the blockchain to work properly.

There are several consensus mechanisms that can do that, each with its pros and cons.