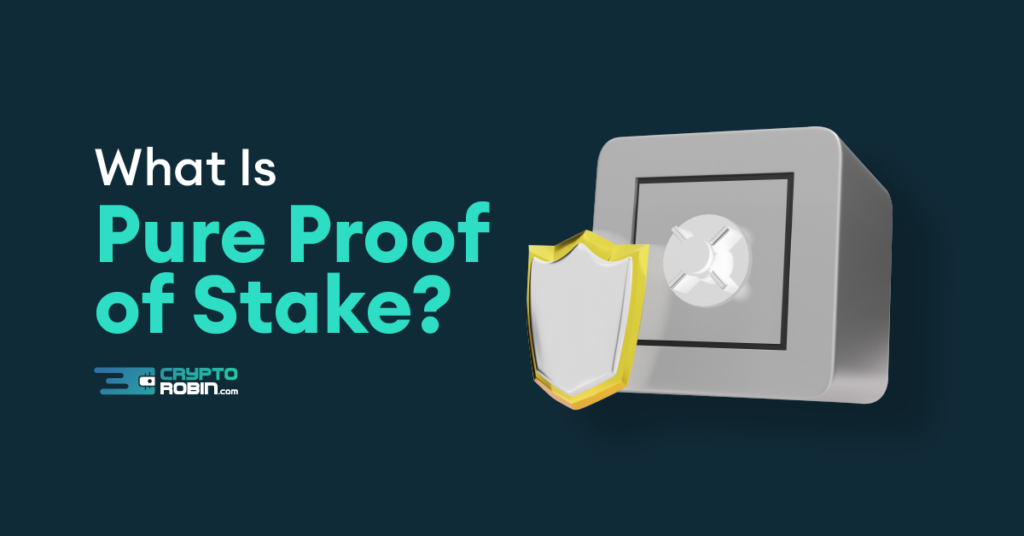 In this article, we’re going to explain what the Pure Proof of Stake consensus mechanism on the Algorand Blockchain entails and how the selection of validators and the validation process take place. We will also briefly cover its advantages and disadvantages.

What Does Pure Proof of Stake Mean?

In short, PURE PROOF OF STAKE™ is a Permissionless Consensus Mechanism specific to the Algorand Blockchain, which ensures full participation, along with blockchain protection and good transfer speeds, in a truly decentralized network.

What makes this protocol a variation of Proof of Stake is that validators are not only chosen to participate based on the consistency of their stake — that is, the number of $ALGO they own — but also through random selection, no matter how many coins they own.

Their automatic selection is based on a Verifiable Random Function. The VRF behaves similarly to a weighted lottery; practically, each $ALGO in the account of a participant would thus get its own lottery ticket.

How Are the Validators Selected?

Within Algorand, every investor who owns $ALGO can participate in the consensus protocol. To reduce the level of exposure, users don’t use their so-called spending keys (i.e. a kind of private keys that they use to spend their stake) for consensus.

Instead, whoever wants to participate as a validator within the protocol generates and registers a participation key. With this key, they can participate in proposing and voting on blocks. The use of such participation keys ensures the safety of a user’s cryptocurrencies, even if the participating node is compromised.

Every block in Algorand includes a so-called selection seed, which is random and unpredictable, and which determines and decides which users should participate as validators in the next round of the consensus protocol.

When the new block is added to the Blockchain, all users will see this selection seed. Each user who has proposed themselves as a validator can secretly check whether they have been selected to participate by evaluating a VRF, with the help of the participation key they have and based on that selection seed.

The need for computation is minimal, so even a device with limited resources can do this. The VRF computation thus produces a pseudorandom output, with a cryptographic proof that anyone can use to verify the result. By holding or sending this proof, a user can demonstrate at any time that they have indeed been selected to participate in the consensus mechanism.

How Does Voting Work?

This Consensus Mechanism requires three steps, to propose, confirm, and write a block to the blockchain:

1) Block Proposal is the process through which the validating candidates are selected.

First, each node analyzes the accounts it manages and, using the Algorand VRF function, determines which accounts are online and willing to participate, sending the information to the rest of the nodes on the network.

Thus, each node receives block proposals from the rest of the nodes on the network, along with a VRF output, which proves that those proposals are valid.

2) Soft Vote – here, each node will run the VRF, analyzing whether an account was chosen to participate in the soft vote committee. If the selection is confirmed, that account will receive a weighted vote according to the number of $ALGO it holds.

Proposals are filtered based on the lowest VRF timeout, with each node identifying a single option and sending it forward to the other nodes, along with the VRF proof.

Once a quorum for the soft vote has been reached, the process moves to the certify vote stage.

At this stage, a new committee is selected to verify the block proposal that resulted from the soft vote. If no deviations are identified, such as overspending and double-spending, the block is considered valid and the committee thus certifies it as such. The selection of the accounts specific to a node is now resumed, precisely to achieve this final certification.

These votes are collected and validated by each node until a quorum is reached, thus triggering the end of a round and requiring the node to generate a certificate for the new block and write it to the ledger. After that, a new round will be initiated and the process will start all over again.

What Are the Advantages of Pure Proof of Stake?

Based on this Consensus Mechanism, the blocks are finalized in seconds, the Algorand transfer being similar to that of large payment networks. That is why Algorand is the first Blockchain to promise immediate transaction finality and exclude the risk of a Hard Fork.

The high speed is also due to the fact that if a node proposes an erroneous block or malicious actions are identified, the owners of the problematic stake are not penalized. This happens precisely to avoid the interruption of the network’s activity when such an initiative is identified and, therefore, to shun a negative outcome altogether.

One aspect of Proof of Stake that kept raising questions was the fact that, while solving the scalability problem, it made it likely for those who staked a huge number of tokens to become a monopoly, thus jeopardizing the decentralized nature of the network.

It seems that Pure Proof of Stake approaches the dilemma in an equidistant way. The difference would be that it initially selects validators randomly, and not just according to the number of staked tokens. Therefore, all users of the blockchain can be selected at some point to participate in the validation, which ensures security and a higher level of decentralization.

At the same time, only the proposed ones can check whether they have also been selected, which discourages the attacks or the activity of malicious people and entities. Therefore, an opponent can know who has weight in the generation of the next block only after the selected user has already participated in the consensus protocol, any attack on the network thus being discouraged.

As I was saying in the previous video, the operations involving the Verifiable Random Function don’t require large amounts of energy, nor do they require very complex hardware to be able to be performed. In other words, a validator for Pure Proof of Stake doesn’t have to invest considerable resources to participate in the network.

What Would Be the Disadvantages of Pure Proof of Stake?

Apart from the monopoly a large number of staked tokens could create, which PPoS solves, this Consensus Mechanism has pretty much the same disadvantages as the classic PoS.

The staking rewards are not very encouraging, except as a form of passive income and in relation to large amounts of staked tokens.

The blockchain can tolerate an arbitrary number of malicious users, as long as honest users (those who follow the protocol’s instructions) hold more than two thirds of the system’s total stake.

On Algorand, the number of staked tokens of a node that has proposed a problematic block is not reduced to discourage future participation.

Instead, the network immediately goes into recovery mode and the process continues. While this ensures increased speed, it is criticized by the community for not punishing malicious participants.

The Pure Proof-of-Stake consensus mechanism is a variation of Proof of Stake, in which the validators of a new block are not only selected based on the number of tokens they have staked but also randomly, through the Verifiable Random Function.

This mechanism chooses block leaders randomly, keeping the status of the validators secret until the transactions have been confirmed as correct.

Algorand is the Blockchain that created and uses this Consensus Mechanism.

Any user who owns $ALGO, regardless of the amount of tokens they have, can become a validator, being selected based on a Verifiable Random Function.

The node proposing a new problematic block is not penalized. Instead, the network goes into recovery mode, which allows it to avoid fraud and attacks, as well as to ensure high transfer speeds.