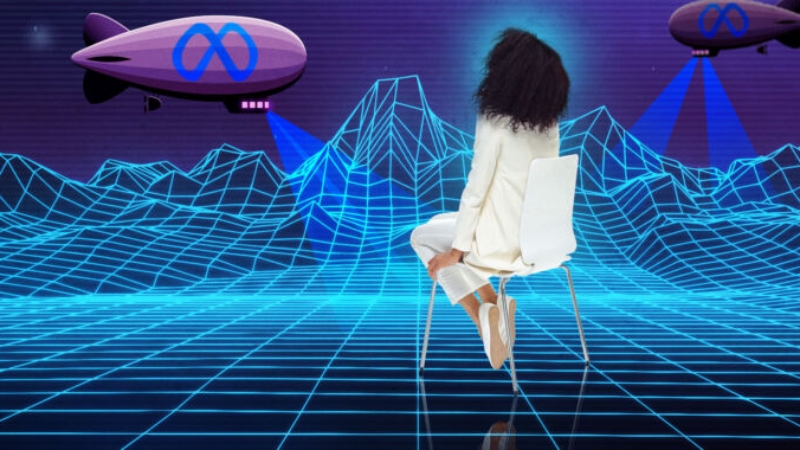 Feeling fatigued by the bad news you hear every day? Soon enough, if things go according to plan, you could be able to escape all of that thanks to the metaverse. Not because they would stop existing but because you could really live your best life in the virtual world.

You’ve surely heard of the metaverse by now, probably thanks to Facebook – now known as Meta – which announced it began working on creating a whole new world that is just like ours but virtual. It’s like those VR games in which you need a screen, a console, and a pair of special glasses to suddenly walk side by side with dinosaurs or escape a haunted house.

But the metaverse would let you do even day-to-day tasks. Is there an office meeting planned, but the stormy weather makes it difficult to go out? You can be there in a metaphysical way, in the metaverse, while you are still in the comfort of your own home.

OK, maybe that is actually a downside of the metaverse, so here is a better example: going to a concert!

In early 2020, Travis Scott held a concert in Fortnite, the free-to-play, cross-platform game, which already has generated over $10 billion in gross revenue. Those wishing to attend just had to download the game and find the stage where the hitmaker performed for ten minutes as a giant version of himself in a trippy / Sci-Fi setting. The audience and the rapper went from being underwater to flying in space.

Prior to this, Grammy-winner Lil Nas X also performed a virtual concert in the game Roblox, a full 3D virtual experience that may indicate the way concerts may go in the future.

You’ve probably heard of ABBA Voyage by now. It is a concert residency show scheduled to start in London in 2022, in which ABBA will perform their greatest hits in front of a live audience. There’s just one thing – the actual members of ABBA won’t be there, they won’t even be in the country.

Using motion-capture and performance techniques, the group members were turned into avatars, dubbed ABBAtars, which would get up on stage and perform their signature songs. Picture it as holograms but in a highly advanced form.

Pretty mind-blowing, isn’t it? But, at the same time, it seems to be the direction of the future, and it encompasses what the metaverse is all about – doing everything that you want in a digital world without actually having to do it all in the real world.

What Is the Metaverse?

The metaverse refers to a shared, immersive virtual world in which avatars representing people have the possibility of interacting with one another, creating new experiences, and building in-world objects or even landscapes.

A metaverse has its own economy and currency, thus allowing people to buy, sell, or trade digital real estate, accessories, and so on. This can be experienced using a computer, a smartphone, or a virtual reality headset.

There is already a precedent for something in the lines of a metaverse. Back in the 2000s, a game called Second Life boomed as over a million people flocked to the 3D, web-based alternative reality.

They were allowed to explore the world as customizable, cartoon-like versions of themselves. Around $100 million were spent by users on a yearly basis for in-game purchases. Due to the limitations of the technology at the time, the game fell out of favor over time, although it is still around today with about 600,000 users.

What Is a Crypto Metaverse?

A crypto metaverse is not different, on the surface, from the type we’ve already discussed, but it does stand out for using a blockchain as the underlying technology and crypto assets, like tokens, for its economy.

Among the best-known crypto metaverses already in existence, we can mention The Sandbox, Decentraland, and Axie Infinity.

As we’ve mentioned before, the metaverse has been around for quite some time but using blockchain, crypto, and VR, all wrapped into one, makes a world of difference.

Metaverse crypto assets and items, like digital land or objects, are usually represented by various types of metaverse tokens. Their possession is recorded on the blockchain, and in some cases, they can be traded for digital assets such as Bitcoin or Ether.

So you want to buy a new pair of shoes in the metaverse? Those shoes can be from Adidas, and you may actually choose to buy them as an NFT, which could also have value in the real world. This means that while you would be spending money in the metaverse, you could also make money in real life.

In fact, it’s what the games mentioned above rely on – they may look like regular games, but they are actually play-to-earn. This means that you make money as long as you play the games, and no, it is not a scam.

If you are still suspicious of the idea, you can take into consideration the fact that the above-mentioned Adidas example isn’t a fictional one – the company really joined the metaverse.

Not to be outdone, Nike has also joined in as it applied for the trademark to make and sell virtual shoes. You can enjoy a can of virtual Pepsi while you wait, as the soft drink company is also joining the metaverse. Quite exciting, isn’t it?

In the case of the previously created virtual worlds, they used to be completely owned and controlled by a company. The crypto metaverse should be fully decentralized, with as many parts as possible being created on blockchain technology.

As a result, a blockchain metaverse strays away from the typical mainstream structure of a classically-run business.

This different structure of blockchain games means there are more equitable engagement chances for those taking part. Furthermore, ownership of the metaverse is divided between the participants, instead of one single company taking full ownership of it. This means that even in the case that the creator of a game was to stop being involved for any reason, the game itself would be able to continue existing forever.

There is a danger lurking, though, which is the one of the big tech companies taking over the metaverse. Instead of living a free, decentralized life, if Amazon, Google, or Facebook take over, you would have to obey their rules and regulations, which would defeat the purpose of the whole concept.

Basically, even if the big tech does get involved in the metaverse, we need to be ready to voice our opinions and stop them from creating a monopoly as they’ve done with social media. The metaverse shouldn’t fall for the same tricks!

The items in a crypto metaverse appear as crypto tokens, like NFTs. Buying items or making progress in the game can offer value to gamers. Since NFTs are unique, the metaverse tokens and items are usually coded so that they can be used as proof of in-game user-generated content but also as gaming assets under the form of NFTs.

Crypto metaverses such as Decentraland rely on DAOs and governance tokens to allow users to control the direction in which the game is headed. Therefore, users can make changes or update the game using voting. As a result, a metaverse can become more than a simple crypto game, but it can be a whole society with its own economy and elected leaders.

This means that you can run for office in the metaverse, and you may even win the elections. It may not sound like much, being the mayor of a fictional virtual city, but here is what it actually means. In order to get there, even in a virtual world, you would still have to undertake all the steps that you would in real life, like debating your opponents and running a successful campaign. It’s as if you would be training for this real-world activity in the metaverse before taking the step in the real world.

The Economic Value in the Real World

Since a crypto metaverse relies on crypto tokens and blockchain infrastructure, the economy of such a space is connected directly to the wider crypto economy.

This lets those who own metaverse tokens, skins of avatars, or real estate in digital form make trades among themselves on NFT marketplaces or DEXs, thus influencing the value in the real world of the investments they made inside the game.

Basically, a digital car bought by a digital person in a digital marketplace has as much economic value as the real-world equivalent. This means that the economy could develop not only as part of a game but as part of the real world as well.

The crypto metaverse has just begun developing, which means that this world is one full of potential, socially and economically.

It can let you discover new and various ways of playing, investing, and even interacting, all while making money from these actions.

While every news regarding one metaverse is already exciting, what truly shines is the potential of all of the separate metaverses being able to interoperate and interact with each other, which could push the value of the blockchain gaming ecosystem even higher to the point where it becomes part of the global economy.

The potential is so big that we still don’t know exactly how much this idea can grow, but by using VR elements, the relaxing and fun idea of playing video games, and the value of crypto, the crypto metaverse is most likely going to be a very important part of the next phase of the Internet and of the real world as well.