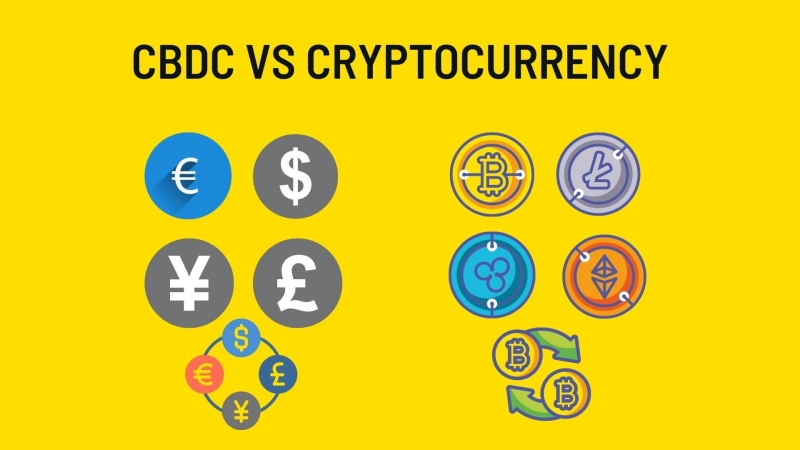 A CBDC or a Central Bank Digital Currency represents a digital token issued by a central bank that has its value pegged to that country’s fiat currency and it’s similar to a cryptocurrency because it uses blockchain technology.

Blockchain technology lets various entities hold a copy of transaction history so that it is distributed and not in the control of just one entity.

Basically, you can see a CBDC as the child of currency issued by the government and Bitcoin.

How does a Central Bank Digital Currency Work?

A Central Bank offers physical money in the form of banknotes which are then used to make various kinds of payments.

A CBDC would be issued by the Central Bank and it would represent electronic money which then can be used by businesses and households. As a result, everybody could make electronic payments using central bank money.

Let’s say that a CBDC would be introduced in England. It would be denominated in pounds sterling, similar to how banknotes are, meaning £10 of a CBDC would always have the £10 of a physical note.

CBDCs are often seen as being analogous to digital banknotes, but some believe a better comparison would be a bank deposit.

If a CBDC is introduced, it will function alongside cash and bank deposits, not replace them.

The differences between CBDC and Cryptocurrency

There are several differences between CBDCs and cryptos. For example, while both of them use blockchain technology, CBDC rely on permissioned or private blockchains, while crypto uses permissionless or public blockchain. The former represents a centralized structure, while the latter doesn’t.

Another difference stems from the level of anonymity. While a crypto user can be completely anonymous, a CBDC user will have their identity known as they will have a bank account and personal information will be shared for that.

Decentralization is also a big difference between these two, as central banks are the ones who make the rules for a CBDC network, while for crypto, as we know, users and miners have the authority.

Obviously, volatility represents another difference between CBDC and crypto, as a CBDC will always be pegged to national currency while the price of any crypto, such as Bitcoin, can oscillate quite a lot from one day to another.

On one hand, CBDCs offer efficient and secure payments, but they are completely controlled by central banks.

CBDCs also allow consumers to use the central bank directly, which is great, since many countries have high percentages of people who are unbanked, but that comes at the cost of privacy.

Furthermore, CBDCs are easy to track, but we may see competition between central and commercial banks.

On top of that, people won’t have to experience the risk of working with a commercial bank that has the potential to collapse, making them less risky as long as the central bank of the country is stable.

Then again, it could take time for CBDCs to become popular with the public as many people will certainly not trust them at the beginning.

The only regions that currently have a CBDC working are The Bahamas, the Eastern Caribbean, and Nigeria, but many others are already in the pilot stage, such as China, South Africa, Malaysia, Sweden, Thailand, and Saudi Arabia.

Canada, Japan, India, and Australia are in the development stage, while the US, UK, EU, and New Zealand are in the research stage for now.