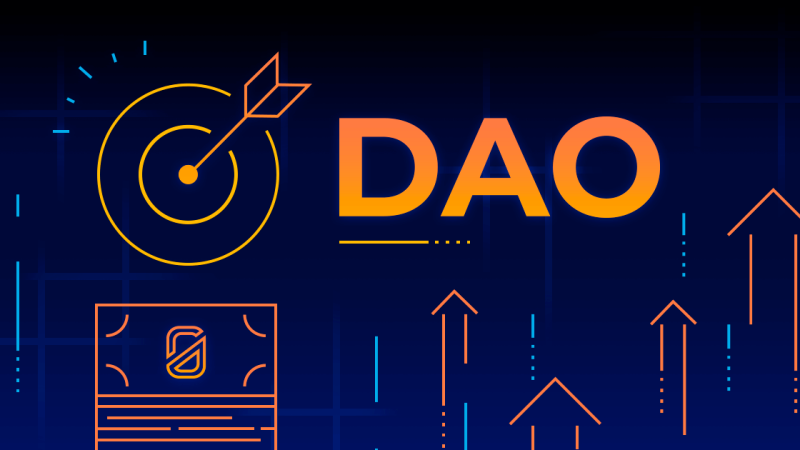 Holiday houses are expensive – we all know that. Buying one by yourself is not something a lot of people can do. But there are ways around it.

You could, for example, take a loan from a bank and pay for it over time, but that means you have to follow the terms and conditions of the centralized institution which is not ideal.

Another solution, and a better one, would be to pitch in with all of your friends. None of you have the full sum but put together, you can buy the home for all of you and all of you are the owners of it.

You all do what you can to hold the house together. Someone takes care of cleaning the windows, someone is in charge of cleaning the floors, someone dusts off … Basically, all of your efforts combined are helping you run the house by yourself, in a decentralized autonomous way, without having to use the help of a centralized institution that would govern over you.

That is how we could say a DAO works as well – a system or group of people who coordinate and govern themselves using smart contracts so they can stay away from centralized control.

A Decentralized Autonomous Organization (DAO) is a blockchain-based system that lets people coordinate and govern themselves while being mediated by a series of self-executing rules, deployed on a public Blockchain with decentralized governance, meaning independent from central control.

Decentralization refers to the fact that there isn’t any need for central government intervention. Autonomous refers to the amplification of smart contracts and encoded transactions on the Blockchain.

So it is like our holiday house example. There is no big boss to call the shots, the house in our example, and the DAO we are talking about, don’t need one.

How Does DAO Work?

Probably the most important feature of DAO is the Smart Contract – and please don’t forget that we also have a video explaining this concept. The contract is the one that establishes the rules of the organization, and it is also responsible for holding the group’s treasury.

After the Smart Contract has gone live on Ethereum, its rules can only be changed following a vote. If someone tries to do something that doesn’t follow the rules or logic of the code, it will simply fail. Since the treasury is also defined by the Smart Contract, this means that the money can not be spent without having the approval of the group.

This translates into DAO not needing a central authority as it relies on the group to make a collective decision while payments are authorized automatically when votes pass.

All of this is possible thanks to the fact that Smart Contracts are tamper-proof once they are live on the Ethereum network. The DAO rules prohibit edits to the code without being caught as everything is public.

Going back to our example, it is like nobody is allowed to make changes to the house by themselves. You may think green curtains go better in the living room, but you won’t change that by yourself when everybody owns the house.

Instead, you propose the change, and people vote on it. If people like the idea, the change will be implemented. If people don’t agree with it, no change will be made to the curtains. This makes sure that everybody is happy with all changes at all times.

Maybe the most important advantage of DAO is that it solves the principal-agent dilemma.

When a system has a structure that may allow an entity (the “agent”) to make decisions or take actions in the name of another entity (the “principal”), there is intrinsic risk in the divergent goals, priorities, or access to important information of the respective parties.

Since DAO doesn’t allow changes to be made without a vote, such an issue can not exist – save for extreme cases of hacking, which are extremely rare.

This is exactly what we were saying previously. If you were allowed to make choices for everybody, you could add the green curtains to the living room without consulting anybody, maybe even knowing that some people in the household don’t like green.

Letting someone have all the power can have disastrous results even when that person was chosen in a democratic way because they can have their own secret agenda. Having to consult with everybody means that most, if not all people, will be happy with the end result.

How To Get A DAO Membership?

There are two ways to get a DAO membership. Membership is able to determine how voting works and other important parts of the DAO.

The first one is the token-based membership. This one is usually completely permissionless. These tokens can be traded on a decentralized exchange. Others can be earned through providing liquidity or other types of proof of work. Basically, holding a token offers the right to vote.

This option is usually utilized in governing broad decentralized protocols or even tokens themselves. MakerDAO would be a good example of this. Its token, MKR, can be found on different decentralized exchanges, which means that anybody can influence the future of the protocol by acquiring the token.

The second one is the share-based membership. This one is more permissioned but remains quite open. A prospective member has the option of submitting a proposal in order to join the DAO, usually offering some tokens as tribute. Shares mean direct voting power and ownership.

This type is more common in closer-knit, human-centric organizations, such as investment clubs or charities. It can also govern protocols and tokens.

A good example would be MolochDAO which is focused on funding Ethereum projects. It asks for a proposal for membership so that the group can evaluate if said person has the needed capital and expertise in order to make the right decisions for the protocol.

In other words, it is as if another person would want to join your house and wishes to make some changes to it as well. The already-existing household analyzes the person, what they are saying, how those changes would work with the existing design, and then a decision is made based on a vote. Democracy is awesome!

A DAO represents a blockchain-based system that people can use in order to coordinate and govern themselves without having to use centralized control. They are mediated using self-executing rules that are then deployed on a public blockchain where the governance is decentralized.

This means that every proposed change or each money spent has to go through a community vote. Changes happen only if the community agrees to them which keeps things fair for everybody.

DAO also solves the principal-agent dilemma, which is a big benefit.