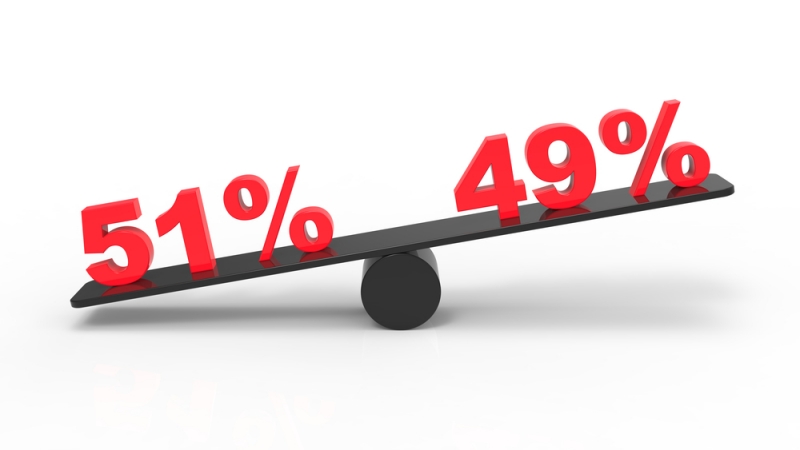 In this article, we will tell you about the 51% Attack, how it works, and compare it to another possible version, the 34% attack.

A 51% attack refers to an attack on a blockchain in which a group of miners gets to control over 50% of the network’s mining hash rate or computing power. It’s usually used in relation to the Bitcoin network, where such an attack could be possible – at least, in theory.

That group of miners would be able to stop new transactions from being confirmed, basically not allowing any payments between some or all users. Furthermore, they would have the opportunity to reverse transactions done while they were controlling the network, meaning they would double-spend coins.

It would be very unlikely for them to create new coins or be able to alter old blocks. In the end, no matter how damaging it would be, a 51% attack wouldn’t be able to simply destroy Bitcoin or any other blockchain-based currency.

Bitcoin and many other cryptocurrencies are based on a blockchain, which is a sort of a distributed ledger. Digital files record all transactions made on the network of a cryptocurrency, and the general public is allowed to see them. This means that nobody can spend a coin twice.

As you can tell from the name, a blockchain represents a chain of blocks, where all data regarding transactions is recorded, and you can learn more about this technology in our video on blockchains. In the case of Bitcoin, a new block is created around every 10 minutes. After the block is finalized, no alterations can be made to it, as it would be noticed and rejected by the users on the network.

But if the majority of the computing power on the network is controlled, an attacker could tamper with the aforementioned process. They could stop all other miners from completing blocks, which would, in theory, give them the monopoly over the creation of new blocks, and as a result, they could receive all the rewards.

How Would It Work on Bitcoin?

In the case of Bitcoin, the reward is not 6.5 newly-created Bitcoin, a number that, in the future, will reach zero. Other users’ transactions can be blocked, and a transaction can be sent and then reversed, which would make it look as if the attacker still owned the just spent coin.

But changing historical blocks, meaning those transactions that were locked in before the start of the attack, would prove to be tough even if a 51% attack took place. The older the transactions are, the harder it is to modify them.

Actually, it would become impossible to modify transactions before a checkpoint, past which transactions are hard-coded into Bitcoin’s software.

In the past, a couple of blockchains have actually suffered 51% attacks – in August 2016, both Krypton and Shift, two blockchains based on Ethereum experienced it.

Another notable one was Bitcoin Gold, in May 2018 – at that time, Bitcoin Gold was the 26th-largest crypto, so the attackers managed to steal over $18 million worth of Bitcoin Gold. The network suffered from such an attack again in 2020.

The tangle, which represents a distributed ledger that is basically different from a blockchain, but created with the same goals, could, in theory, fall to an attacker deploying over a third of the network’s hash rate, which is known as a 34% attack.

A 51% attack refers to a miner who acts as a bad actor and takes over the network by controlling more than half of it. Such an action could affect the network and help the bad actor double-spend coins they don’t actually own.

The most prominent network for which such an attack would be possible is Bitcoin, although nobody has ever succeeded in taking over the cryptocurrency.

Several attacks have been registered in recent years, including on the Ethereum network. Although it can damage the reputation of a coin, such an attack isn’t capable of knocking down a token or a blockchain completely.