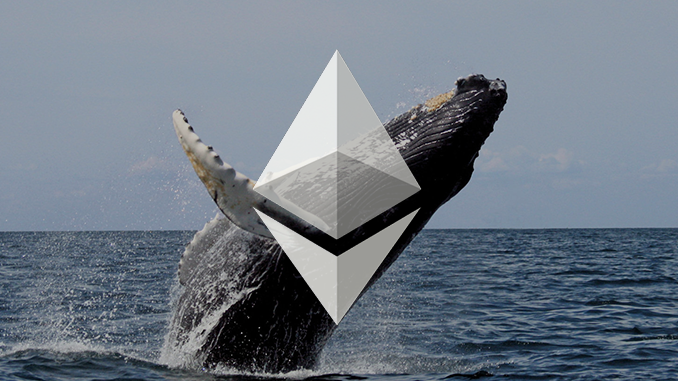 The second-largest cryptocurrency in the world, Ethereum, enjoyed a rebound today with ETH reaching $1,750 for the first time in two weeks. Ethereum addresses that own at least 10,000 ETH now hold around 68% of the total supply.

The data comes from Santiment, a crypto analytic firm, which discovered that Ethereum whales now own the highest percentage of ETH supply since November 2017. Then again, it is also worth noting that ETH addresses that hold between 10 – 10K Ethereum have hit the lowest levels since September of the same year.

Ethereum’s price keeps growing since 2021 has begun. As a result, Ethereum is now up over 120% in the last 8 weeks. On February 20th, ETH reached its ATH of $2,030. Currently, the cryptocurrency is being traded at around the $1,740 level and has a total market cap of close to $200 billion.

The price surge has also escalated unknown ETH transactions. Whale Alert has confirmed an anonymous transaction today of 68,000 ETH worth over $110 million to an unidentified ETH wallet.

ETH has its problems, of course, but it has been proven to be more and more popular among retail and institutional investors.

The upgrade for Ethereum’s network started in December 2020 when Beacon Chain was released. Ethereum 2.0 is supposed to arrive with several benefits, such as network efficiency and – very important at the moment – lower transaction fees.

The adoption by institutions has an important role in the surge of ETH whale addresses. Grayscale is the largest crypto asset manager on the globe, and it owns 138,361 ETH worth over $240 million – this just in the previous 30 days. In total, Grayscale owns over 3.17 million ETH with a value estimated at $5.5 billion.

Ethereum continues to be the best performing digital asset when it comes to the top 5 cryptocurrencies since ETH jumped over 21% in the last week.